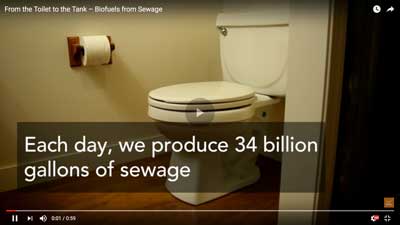 Hydrothermal liquefaction technology (HTL) mimics the geological conditions that create crude oil, using high pressure and temperature to achieve in minutes something that naturally takes millions of years. According to the Pacific Northwest National Laboratory (PNNL), this biocrude can then be refined using conventional petroleum refining operations.

Sewage sludge was previously seen as a poor source of biofuel because it’s too wet. With the process developed by PNNL researchers, sewage does not need to be dried out before it can be transformed into biocrude.

Hydrothermal liquefaction breaks down organic matter, such as human waste, into simpler chemical compounds. The material is pressurized to 3,000 PSI and sent into a reactor system operating at about 350ºC. The heat and pressure cause the cells of the waste material to break down into different fractions – biocrude and an aqueous liquid phase. PNNL estimates that a single person could generate seven to 11 litres of biocrude per year.

PNNL has licensed its HTL technology to Genifuel Corporation, which is now working with Metro Vancouver to build a demonstration plant.

“Metro Vancouver hopes to be the first wastewater treatment utility in North America to host hydrothermal liquefaction at one of its treatment plants,” said Darrell Mussatto, chair of Metro Vancouver’s Utilities Committee, in a press release. “The pilot project will cost between $8 to $9 million, with Metro Vancouver providing nearly one-half of the cost directly and the remaining balance subject to external funding.”

Once funding is in place, Metro Vancouver said it plans to move to the design phase in 2017, followed by equipment fabrication, with start-up occurring in 2018.

In addition to the biocrude, the liquid phase can be treated with a catalyst to create other fuels and chemical products. The process generates a small amount of solid material that contains nutrients such as phosphorus, which can be recovered for other uses.

Jan 30, 2023
A toxic chemical often used to make toilet paper was prevalent among an array of concerning chemicals found in the bodies of orcas and...

CANECT chairs named to 2023 Lexpert guide for top lawyers in...