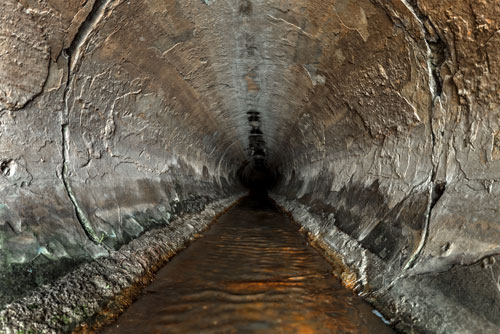 By Barbara Robinson and Dan Sandink

An ongoing survey of Ontario municipalities is being conducted to identify the underlying causes and conditions of, as well as solutions to, high inflow and infiltration (I&I) in subdivisions.

Recognizing that this issue was likely prevalent across Ontario, Norton Engineering Inc. initiated a project in 2015 to examine the problem in more detail, to identify the underlying causes and conditions, and to develop feasible and cost-effective solutions for municipalities and regulatory officials.

This ongoing project has been funded by a variety of municipalities and non-profit agencies in Ontario. Staff from the Institute for Catastrophic Loss Reduction and the Region of Peel have been particularly helpful in guiding the project.

Firstly, data was collected from new subdivisions across Ontario, which had been subject to flow monitoring. In total, results have been obtained from thirty-one subdivisions in Ontario, as of June 2017.

Flows observed in these subdivisions were deemed “unacceptable” by the reporting agencies. However, this study examined what an “acceptable” I&I number should be.

Following the confirmation that the vast majority of subdivisions which had been flow monitored were producing unacceptable I&I, detailed surveys of municipalities across Ontario were undertaken. Surveys were conducted with staff from development, planning, engineering and building departments. Supplemental information was also collected from consultants, contractors, developers, builders and other industry representatives.

All participants in the working sessions and surveys were promised confidentiality, so the sources of specific comments are not identified in this report. This project does not purport to examine what the specific defects are, but rather to determine why these deficiencies are occurring in the first place

In Ontario, engineering/development departments oversee the public-side of sanitary sewer systems (usually mainline sewer and lateral to property line). Municipal building departments oversee private-side systems (property line to house). Private- and public-side systems fall under completely different legislative regimes, and are therefore treated separately here. The engineering community, who concern themselves with I&I, doe not normally examine data on the private side, which is under the jurisdiction of the Ontario Building Code (OBC). This makes this project unique. Current thinking around I&I sources across North America suggests that half of the I&I observed originates on the private side.

Results from the public side

The Ontario Provincial Standard Specifications (OPSS) are used by the vast majority of municipalities in Ontario. OPSS 410 (Construction Specification for Pipe Sewer Installation in Open Cut – November 2012) is very clear regarding the Acceptance Testing of New Sanitary Sewers.

Required tests include checking every gasketed joint by feeler gauge, mandrel testing, air/water testing, installation of factory made tees or wyes to connect service connections to the main pipe sewer and CCTV inspection. These are the primary tests that confirm that pipes are correctly laid and not leaking.

Mandrel testing was the most common test undertaken (71% of those surveyed). However, the purpose of the test was not well understood. If a mandrel test of a PVC pipe fails, the pipe is out of round, its service life will be compromised, and the pipe needs to be re-laid. Only one inspector in the surveys performed reported requiring the re-laying of a pipe due to mandrel test failure.

In addition, OPSS calls for the checking of every gasketed joint by feeler gauge to ensure that the gasket is seated properly, which was never observed in this study. However, many CCTV inspections of pipes performed later show the gasket hanging into the sewer (e.g., not providing a watertight seal). It was also reported that most municipal staff did not review the CCTV tapes themselves. Rather, they relied on the developer’s consultant to do this. Many other issues which likely contribute to I&I were observed by survey participants.

Results from the private side

In new subdivisions, several tests performed on private side sanitary infrastructure are explicitly called for by the OBC, and are legally required. Each municipality was asked to report on which of the tests called for in the OBC were being performed.

Failure to construct Sanitary Building Sewers (OBC term: known in engineering as the private side lateral) to a watertight condition contributes to I&I in the municipal system, and increases the risk of sewage backup into basements. The OBC requires every pipe in a drainage system be capable of withstanding, without leakage, a water test, air test and final test.

Another significant issue found in the survey is that bedding and backfill operations frequently do not appear to meet OBC requirements to support plastic pipe being used for the Sanitary Building Sewer (SBS). The plastic pipe used for the SBS is connected by glued joints. This has a more limited capacity to flex the way a gasketed joint (used on the public side) does, so proper bedding is essential. Improperly bedded, glued SBSs have a much higher chance of cracking than gasketed joints.

Various types of solvents (glue) are required on site, and each application requires a different type of glue. Survey participants were not checking that glue used was appropriate for the application, which may compromise the joint. An SBS which is leaking may put residents at greater risk of flooding in the future, as well as allowing the introduction of I&I into the municipal sanitary sewer from the private side.

Public-side tests (if any) are performed, and the underground infrastructure is accepted by the city engineer or equivalent. Then, builders arrive to construct the homes. They dig up the end of the public sanitary sewer lateral to connect the SBS for each home. Differential settlement associated with these two operations is not unexpected. A common source of I&I in new subdivisions is a poor connection of lateral sewer at property line (different sized pipes; lack of a fitting, glue that did not set; offset joints).

The survey revealed that staff in both engineering and building departments struggled with a lack of clear understanding of the various specifications, codes and guidelines that govern their work, and how they related to work in other departments. Indeed, the OBC is open to interpretation in many areas and a wide variety of opinions regarding its requirements were shared with the author.

Municipalities are also starting to face legal consequences associated with not following their own bylaws and specifications. Since many of the issues reported in this survey are already specified or mandated, many may be at risk of legal action if they fail to perform appropriate inspection and testing results in flooding or other negative consequence for residents.

These issues must be resolved from the top down, with substantial support from senior management and politicians, as well as from the bottom up, through staff. Further action on this issue must be made at the municipal level.

The overwhelming conclusion from the project to date is that most municipalities are not insisting on the inspection and testing procedures already required in their Specifications and Regulations (both OPSS and OBS). For municipalities who do not already have data on this subject, they should introduce, at least as a pilot project, flow monitoring of a few new subdivisions, from the establishment of the subdivisions trunk system, to final acceptance, to see if this problem exists for them.

Although in the new subdivision itself there may be ample capacity, the downstream infrastructure should not be expected to convey clean water potentially at the expense of new development, climate change safety factors, overflows and flooding.

It is also largely unknown how systems with relatively high I&I at the time of construction will perform over time when exposed to the extreme short-duration rainfall events generally associated with regional sewer backup and urban flood events. These are expected to increase in frequency and severity as a result of climate change.

Ultimately, the municipality has the power to ensure that new subdivisions are built free of unacceptable I&I. It could withhold Letters of Credit (financial deposit made by the developer) until leak-free infrastructure is delivered.

As a result of the survey some of the participating municipalities are actively engaged in amending development agreements, amending capital development standards for sanitary infrastructure and introducing mandatory flow monitoring of new subdivisions.

Barbara Robinson is with Norton Engineering Inc. Dan Sandink is with the Institute for Catastrophic Loss Reduction. This article will appear in the print edition of Environmental Science & Engineering Magazine’s October issue.

Oct 12, 2021
Researchers at the University of Saskatchewan’s School of Environment and Sustainability say they’ve undertaken the first study of its kind in Canada to determine...

Cleanup continues for one of California’s worst ever oil spills