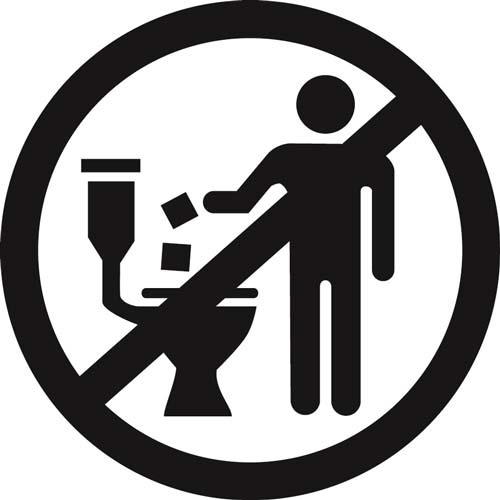 In a new effort to end the ongoing flushable wipes clogging nightmare experienced by municipalities worldwide, two Canadian eco-groups are calling for the Competition Bureau to launch an inquiry and levy false advertising fines to cover the millions in repairs that so-called “flushable” wipes cause each year for municipal sewer systems in Canada.

But, Friends of the Earth Canada, represented in the venture by Ecojustice, are not just demanding the end of false flushable claims, which combined with cooking grease and other elements can cause dreaded “fatbergs” that block pipes and cause flooding, they’re also bringing new evidence to the table in the form of a fresh flushable wipes study undertaken by Ryerson University.

The study saw researchers test primarily baby wipes, but also cleansing wipes and items such as diaper liners, for a total of more than 100 different products, 23 of which were labelled as flushable. Their conclusions? Two of the “flushable” products partially disintegrated in drains, yet 21 of them didn’t disintegrate at all. The only products to not fail the test? Standard toilet paper.

“If you want to label something as flushable then you must abide by criteria,” study co-author Barry Orr told ES&E. “Our government needs to come up with something and The International Water Services Flushability Group has already done the work for them. I can sit here at my desk and tie a knot with a wipe. You can’t do that with toilet paper.”

The International Water Services Flushability Group led to the creation of an initial statement in 2016 on determining flushability. The group advised that flushed items should break into small pieces quickly; not be buoyant; and not contain plastic or regenerated cellulose, but only materials that would readily degrade in a range of natural environments. More than 250 water organizations worldwide signed onto the specification.

The primary difference between wipes and toilet paper is the wipes’ composition of durable man-made material such as polyester, lyocell and rayon that won’t easily break down post-flush. Toilet paper loses on average 90% of its strength when wet, allowing it to disperse in toilets, plumbing systems and sewers. In contrast, flushable wipes only lose an average of 29% of their strength in wet conditions, explains Orr, who is also a researcher at Ryerson Urban Water.

According to the eco-groups lobbying the Competition Bureau, the flushable wipes in question are sold under the Cottonelle, Charmin and President’s Choice brands, among others. In a statement, the eco-groups contend “marketing these products as ‘flushable’ is false and misleading and there are environmental and cost consequences associated with consumers believing and acting on those claims.”

In a statement, Ecojustice lawyer Bronwyn Roe noted that: “Although Canadians are the ones flushing these wipes down their toilets, it’s the makers of these products who should bear the bulk of the blame because of their misleading labelling practices.”

The general logic around manufacturers’ reluctance to alter the composition of wipes appears to rest with what’s called a finger “poke-through” test, suggesting that there is fear that consumers would lose interest in wipes if they were somehow less durable. Additionally, manufacturers typically argue that it is items not labelled as “flushable” that are causing clogs and that they can’t control what people put into toilets.

Investigating and analyzing wipe blockages can be both dangerous, expensive and difficult to link to a particular company.

“When they get into a blockage, they’re very hard to take apart,” said Orr, who in addition to his role as city sewer outreach and control inspector for London, Ontario, is a spokesperson for the Municipal Enforcement Sewer Use Group (MESUG), which launched the Ryerson study. “The wipes get roped together and twist. There could be needles or sharps or hairs in it,” he added.

Most flushable wipes that don’t end up clogging sewer infrastructure end up as intact waste amongst aquatic life in waterways.

If failing the Ryerson study’s disintegration tests wasn’t bad enough, most of the products tested for basic drainline clearance did not clear the drainline in a single flush, sometimes requiring up to six 6-litre flushes.

Some companies have decided to move to regenerated cellulose for wipes, which may be able to be handled by a composting facility, but not a toilet, said Orr.

This new move is not the first time MESUG has been involved with the Competition Bureau. Since 2012, it has been lobbying for change on the wipes issue and has engaged manufacturers and all levels of government to find a solution, or even just make alterations to basic guidance documents. There was a time when it seemed possible that a CSA product certification standard might be possible for wipes, but the venture had funding limitations and fell through, said Orr. Next, the wipes issue went to the ISO level. But after two years of working with manufacturers on a standard, “the manufacturers killed the ISO,” said Orr, noting that they did not want to have a standard with “pass-fail” criteria.

There has, however, been some very recent progress in the wipe fight. In December 2018, Proctor & Gamble settled a San Francisco-based class-action lawsuit over wipe clogging that let members get back about 60 cents per pack (up to $4.20 household maximum) for products purchased between 2011 to 2018.

Additionally, in the California state legislature, a 2019 Bill on flushables is currently winding its way through the amendment process. If passed, the law would prohibit manufacturers from mislabeling items as “flushable” unless they meet certain performance standards. The bill would require non-flushable products to be labeled clearly, and even recommends fines for violators.

Consumer awareness messaging in Canada, meanwhile, has ramped up significantly in recent years, but little progress has been made to curtail consumers flushing wipes.

“Municipalities have been trying for get people to stop using their toilets like garbage cans for years,” reminds Orr.

In fact, for many wastewater experts, wiping out wipes has become a second job, if not a calling.

“I had no idea what I was getting into seven years ago, but our water is so critical to protect,” said Orr. “And I’m just looking at my one little issue here around the wipes, and I know I have to do everything I can do to help out our future generations. We have to do it now, and that’s what’s driving me here.”

Ecojustice is asking concerned Canadians to take part in a petition against flushable wipes on its website.