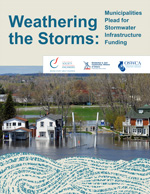 According to a recent report, stormwater infrastructure in Ontario is in poor condition and under tremendous strain as the number of severe flood events increases.

The Ontario Society of Professional Engineers (OSPE), the Residential & Civil Construction Alliance of Ontario (RCCAO) and the Ontario Sewer & Watermain Construction Association (OSWCA) partnered to assess the province’s ability to cope with the impending impacts of climate change and severe weather patterns, by looking at the condition of stormwater infrastructure and the type of asset management planning that is done in municipalities across Ontario.

The joint-report released on July 5, 2017, entitled Weathering the Storms: Municipalities Plead for Stormwater Infrastructure Funding, found that resources and funding are extremely limited. The report estimates that $1.2 billion would be needed to replace stormwater infrastructure in six focus municipalities alone, with populations ranging from under 50,000 to more than 750,000. As this funding gap increases across Ontario, so will the economic and environmental impacts caused by deficient stormwater management systems.

“In an era of more intense weather, OSPE, RCCAO and OSWCA believe this matter must be addressed immediately to protect property and public health and safety,” said Mark Hartley, professional engineer and member of OSPE’s stormwater project team, in a press release.

“Stormwater infrastructure is extremely complicated and is significantly different from water and wastewater. Municipalities need to prepare stand-alone Stormwater Infrastructure Asset Management Plans that include details of both engineered and natural structures, including their replacement as well as operational and maintenance costs,” said Hartley.

Overall, the report’s recommendations centre on the importance of municipalities developing Stormwater Infrastructure Asset Management Plans (SIAMPs). Of the 55 municipalities that responded to the survey, only 35% have a separate SIAMP from their water/wastewater plan. The report says that the Ontario government should use incentives, guidelines and regulations to ensure all Ontario municipalities have the means to develop SIAMPs.

Jan 30, 2023
A toxic chemical often used to make toilet paper was prevalent among an array of concerning chemicals found in the bodies of orcas and...

CANECT chairs named to 2023 Lexpert guide for top lawyers in...