Alberta is handing out $150 million in water infrastructure grants to support 55 water and wastewater improvement projects. According to the province, $137 million is allocated to the Alberta Municipal/Wastewater Partnership for 54 projects that support improvements to water supply and treatment facilities, as well as upgrades to wastewater services such as lagoons, berms and sewage treatment.

The water work grants, which launched in 1991 under Alberta Transportation, go to municipalities with populations under 45,000. Each project will be awarded based on initiatives identified by local governments. However, most have been selected primarily from the program intakes that closed in fall 2019. Eligible projects can receive up to 75% of project costs.

Approved in 2019 were more than $11 million worth of local water projects addressing needs such as new water reservoirs, lagoon rehabilitation, and complete wastewater treatment plant upgrades such as the one in the Town of St. Paul, which remains under construction.

“Albertans in every corner of the province are facing real challenges as our economy recovers from COVID-19 and our municipalities rely on strong local infrastructure to attract investment and grow their economies,” announced Premier Jason Kenney, in a statement. “As we move ahead with Alberta’s relaunch, this additional investment will go a long way to helping rural municipalities get back on their feet and back to work,” he added.

Additionally, First Nations funding of $13 million under the First Nations Water Tie-in Program will support a tie-in for the Ermineskin Cree Nation to the Ponoka regional water pipeline.

Approximately 1,300 jobs will be supported under the new infrastructure funding.

People can visit alberta.ca until August 10 to share feedback on the development of the Alberta Infrastructure Act, which will outline the province’s plan for capital spending and create a breakdown of priorities. Input collected will also help inform the development of a 20-Year Strategic Capital Plan, which will guide the government’s approach to long-term planning for infrastructure.

“We want to hear and learn from industry, tradespeople and everyday Albertans on how we can best address the infrastructure needs of the province,” announced Minister of Infrastructure, Prasad Panda, in a statement. 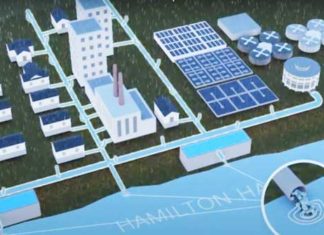 Feb 22, 2021
City of Hamilton officials say it could take nearly a year beyond Ontario’s fall deadline before it’s able to complete the dredging of a...

Vernon forced to discharge wastewater to lake as irrigation use derailed