The federal government announced $120 billion in infrastructure spending over the next 10 years in the 2016 Budget announced March 22. The federal budget mentioned historically low interest rates as a reason for undertaking this massive investment, as well as a need to bolster climate resiliency in Canadian communities.

The Budget’s specific references to water and wastewater investment were welcomed by the Canadian Water and Wastewater Association (CWWA).

“I was thrilled to see how close it hit our major concerns and comments, ” said CWWA Executive Director, Robert Haller. “We’re very pleased that First Nations have been identified in the budget; particularly with a key focus on water.”

Spending has been broken down into two phases over 10 years. Phase One will focus on public transit, water and wastewater systems, affordable housing, and climate change resiliency over the next two years. A proposed $11.9 billion will be spent on Phase One over five years, beginning right away. 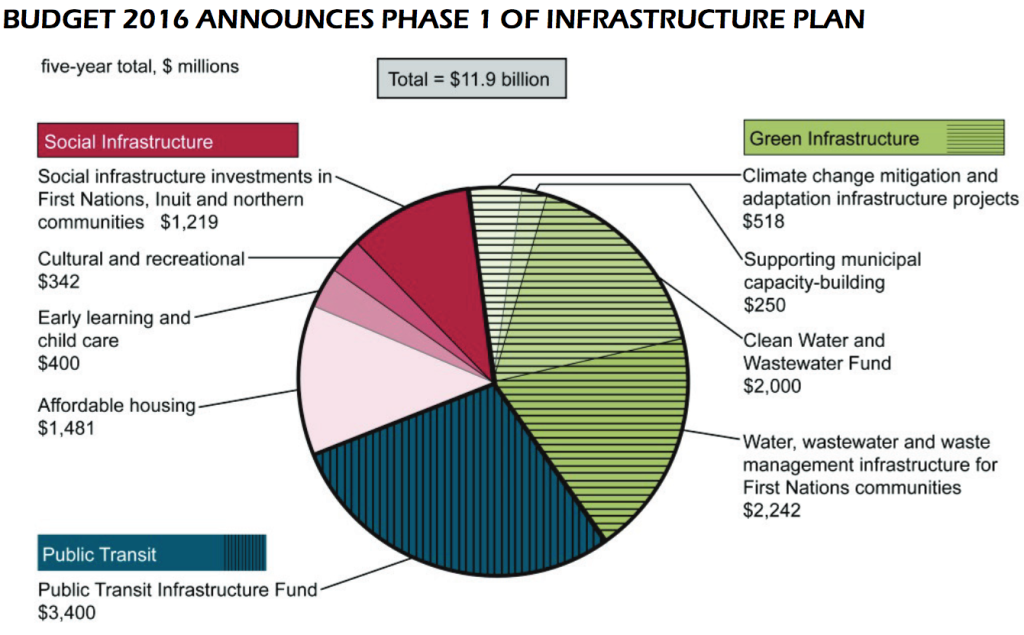 Running over eight years, Phase Two will help Canada transition to a low-carbon, cleaner economy and more inclusive society. These goals are described as “broader and more ambitious,” and account for the majority of the funds.

“Our experience has shown that building new infrastructure alone will not end boil water advisories,” said Geordi Kakepetum, chief executive director of Keewaytinook Okimakanak. “Other elements must be in place to support both new and existing infrastructure, such as providing training and operational support to water plant operators, and monitoring water on a continuous basis.”

A new Clean Water and Wastewater Fund will allocate $2 billion over the next four years for immediate improvements to water distribution and treatment infrastructure. To speed up project delivery, the federal government also said it will fund up to 50% of eligible costs for such projects.

To accelerate completion, some existing projects that will receive federal support in addition to the 2016 Budget include:

The proposed Budget 2016 can be read at: www.budget.gc.ca