Enwave Energy Corporation a $100 million expansion of its Deep Lake Water Cooling (DLWC) system with the support of up to $10 million in federal funding.

Enwave said the new investment, which was announced on January 10, 2019, will help expand the capacity of the DLWC system and serve cooling to an additional two million square metres of floor space – the equivalent of 40-50 buildings. It will also reduce the City of Toronto’s electrical peak demand by 13 MW and reduce annual water consumption the equivalent of 113 Olympic swimming pools

Three high-density polyethylene (HDPE) pipes are positioned along the natural slope of the  bottom of Lake Ontario to pump water from a depth of 83 meters to the Toronto Island Filtration Plant. There, the cold water is processed, then directed to Enwave’s Energy Transfer Station at the City’s John Street Pumping Station. 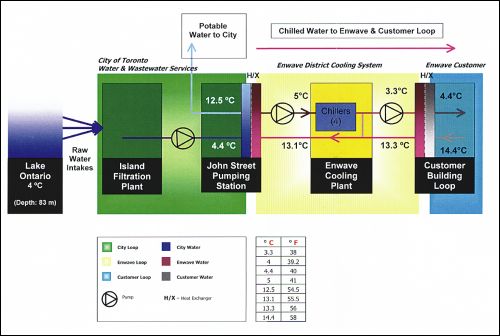 At this stage, the cold lake water passes through heat exchangers to chill the closed loop water supply used by Enwave. Once the energy transfer process is complete, the lake water is then carried into the City of Toronto’s potable water system.