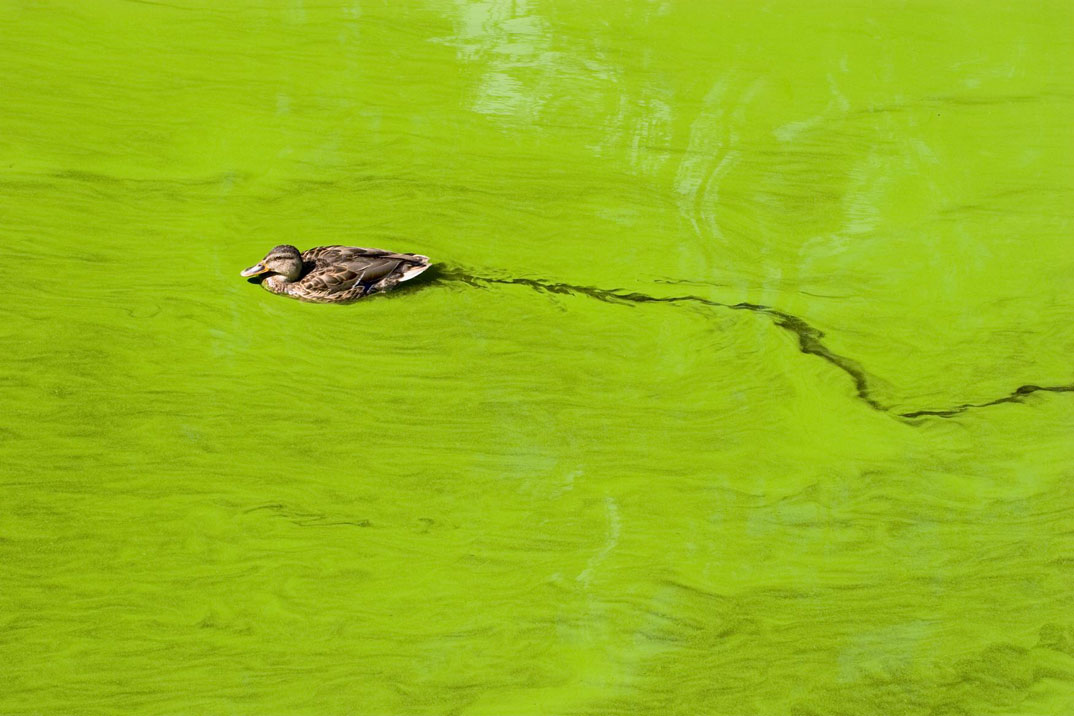 Recently, there have been warnings posted at a number of fresh and salt water beaches across Canada, advising swimmers to refrain from entering the water due to concerns over health hazards from contact with hazardous algal blooms (HABs). There have also been concerns over people consuming drinking water from sources that have experienced HAB blooms.

It is believed that the increasing frequency and intensity of these blooms may be related to global warming. HABs contain blue-green algae, which are not really algae at all. Rather, they are photosynthesizing bacteria (cyanobacteria). The “blue-green” portion of the common name comes from the blue-green appearance that blooms of these organisms sometimes give the waters. The blue-green hue is produced by the cyanobacterial pigment phycocyanin.

Cyanobacteria are an ancient group of aquatic microorganisms that are commonly found in marine and fresh waters. These bacteria can exist in the aquatic environment as single cells, filaments or colonies. While the single cells are only visible under a microscope, the filaments and colonies can be seen with the naked eye. In fact, heavy cyanobacterial blooms are commonly referred to as “pond scum”.

Drinking water utilities have experienced problems associated with cyanobacteria for years, as they release non-hazardous, but nuisance byproducts when the blooms break down. In temperate climates, this usually occurs in the late summer and autumn. The nuisance byproducts are geosmin and 2-methylisoborneol, which impart an earthy-musty taste and odour to drinking water derived from raw waters experiencing cyanobacterial blooms.

A more recent concern is that cyanobacteria also naturally produce cyanotoxins that negatively affect the health of people and animals that consume or have other exposure to these waters.

There are thousands of species of marine and freshwater cyanobacteria, and many of them can produce and release biotoxins. Common cyanotoxin producing genera include: Microcystis, Anabaena, and Oscillatoria. Similarly, there are hundreds of biotoxins that are produced. Microcystins, which are hepatotoxins, have been the most widely studied and are believed to be some of the most virulent cyanotoxins. However, a number of others have also been characterized, including cylindrospermopsin (hepatotoxin), anatoxin-a (neurotoxin), and saxitoxins (neurotoxins). 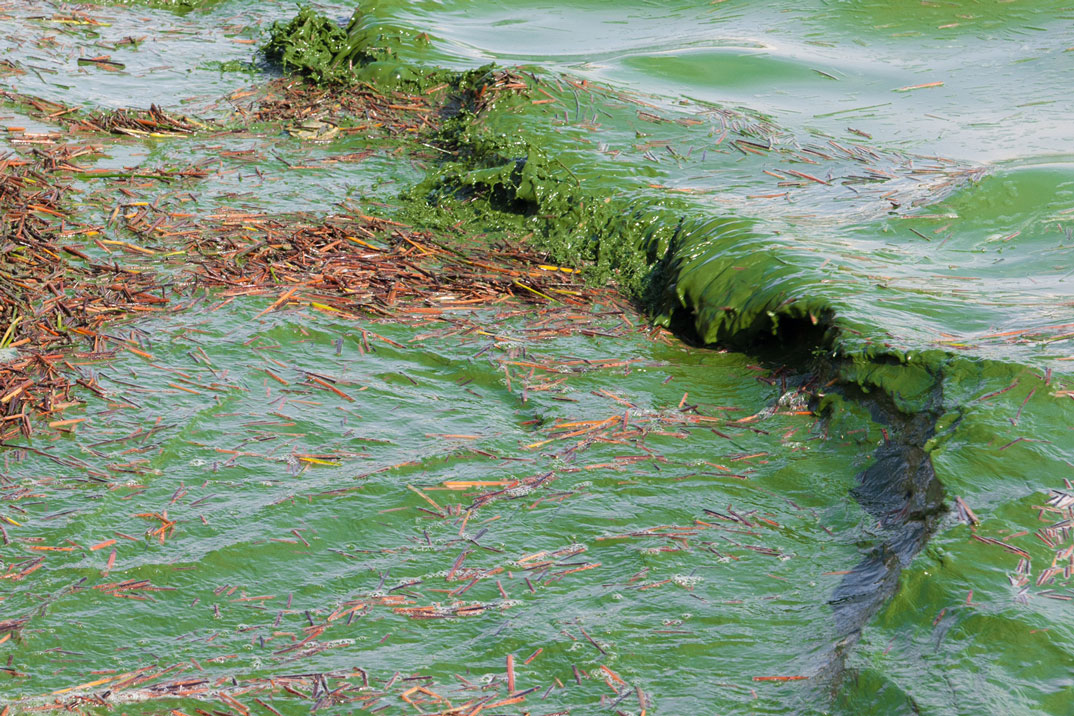 The biology of cyanobacteria and their toxin production and release is complicated. Factors that trigger a particular bloom to synthesize and subsequently release toxins are not well understood. When the toxins are initially produced, they are contained within the cyanobacterial cells (intracellular cyanotoxins). However, at some point, especially when the cells rupture, die and decompose, these are released into the aquatic environment and become extracellular cyanotoxins.

The routes of harmful exposure to the water-soluble toxins are varied and include ingestion, dermal and eye contact, inhalation of aerosols, consumption of fish originating in waters containing cyanobacterial blooms, and intravenous exposure (dialysis). Negative health effects from exposure to cyanotoxins are also varied and include: gastroenteritis; eye, ear and skin irritation; allergic reactions; liver damage; and kidney damage.

There have been a number of major outbreaks of human and animal illness from exposure to cyanobacteria in drinking water including:

Detection of cyanobacterial cells and blooms is accomplished by: traditional microscopic analysis of water samples; molecular biology techniques, such as the identification of DNA and RNA by polymerase chain reaction methods; and even surveillance of water bodies by satellite.

The United States Environmental Protection Agency (USEPA) recommends an overall treatment approach that involves initial removal of intact cyanobacterial cells (by conventional clarification and filtration), followed by oxidation  and adsorption to remove extracellular cyanotoxins. It is important to utilize oxidation after the removal of intact cyanobacterial cells to reduce the possibility of cell rupture and release of additional intracellular cyanotoxins.

The 2014 drinking water cyanobacterial episode in Toledo, Ohio, prompted the USEPA to ramp up its production and release of standards and guidance for HABs. In May 2015, it set drinking water advisory levels for two cyanotoxins. These non-regulatory levels are recommended safe concentrations limits for ingestion of cyanotoxin contaminated water.

Every five years, the USEPA releases a contaminant candidate List (CCL) of substances that it is considering for future regulation in drinking water. The proposed list of candidate contaminants for the upcoming CCL4 contains ten cyanotoxins including total microcystins,  and six specific varieties (congeners) of microcystin,  cylindrospermoposin, anatoxin-a, and nodularin.

Ohio, having experienced potentially hazardous HABs in Lake Erie in 2014, and some interior lakes in other years, has been the most proactive state with regard to cyanobacteria and cyanotoxin regulation. As of June 1, 2016, Ohio drinking water utilities are required to monitor for cyanobacteria and cyanotoxins in raw water supplies and finished drinking waters on a regular basis throughout the year.

While monitoring methods and drinking water treatment approaches have been established, the ultimate solution for dealing with the problem of HABs and their toxins, in both recreational and drinking waters, rests with control of their formation in the first place. There are several limiting nutrients, especially nitrogen and phosphorus, whose increased concentration in lake, reservoir and river waters greatly stimulates algal and cyanobacterial bloom formation.

The sources of these limiting nutrients includes municipal wastewater treatment plant discharges and leaking septic systems, as well as agricultural sources, including animal feed lots and the use of natural and artificial fertilizers.

In 2016, the Canadian Ministry of the Environment and Climate Change and the USEPA formally agreed to reduce the discharge of phosphorus into Lake Erie by 40% in the future to help control HABs. Being the shallowest and warmest of the Great Lakes, Erie is the most susceptible to HAB formation.

Endress+Hauser transitions to new Customer Experience Centre in Burlington, ON

Nov 25, 2021
Endress+Hauser announces that staff have moved into its Customer Experience Centre, the company’s new $28-million platform in Canada for showcasing its “best-in-class” instrumentation technology. The...