Evacuation orders that impacted thousands of residents are ending for some in northern Alberta as most river water levels that had surged from melting ice jams return to normal.

But, a long road ahead remains for cleanup and recovery efforts.

Massive ice jams caused the Peace and Athabasca rivers to spill their banks, damaging thousands of Albertans’ homes and commercial buildings in recent weeks. Some 13,000 Fort McMurray residents in particular were affected by flooding. This even led its regional mayor to consider using the military to break up the ice jams with CF-18 fighter jets or explosives, as had been done back in 1972.

“We are going to do everything we can to support impacted residents and businesses in recovery from this historic flood,” said regional mayor Don Scott in a statement. “The flood’s impact on our neighbourhoods, homes, businesses and families is heartbreaking, and while our community spirit is as strong and inspiring as ever, we are seeking support from the Government of Alberta through the Disaster Recovery Program, as well as the Government of Canada to help our residents during their time of need. If there’s a community that can overcome challenges it is this one and in order for that to happen we need everyone working together to support our neighbours that are impacted.”

The Alberta government has released $14.5 million to assist residents impacted by spring flooding, and local officials are reducing water billing fees for homes impacted by the current Alberta Health Services’ (AHS) boil water advisory as a result of the flood.

AHS will not remove the advisory until the water treatment plant and the entire 375-kilometre potable water distribution system has been flushed, disinfected and tested, officials said. The flushing may make some residential toilets bubble in flood-affected areas. The current schedule completes the water treatment plant phase in 10 days, the three phases of residential flushing in 30 days each, and the final flushing of the entire system for 20 days in phase five is set to conclude in early September.

The boil water advisory is in place for all neighbourhoods in Fort McMurray, Anzac, Draper, Gregoire Lake Estates, and Saprae Creek Estates. Trucked water is being hauled in from the Conklin Water Treatment Plant, which has not been impacted.

“Residents who cannot boil water due to disconnected utilities at their residence can receive up to three cases of bottled water per visit to the staging area,” officials said in a statement.

As of May 8, more than 4,000 residents were still unable to return to their homes due to flooding damage. Water levels on the Peace River remain high and ice jam flooding may occur as the Peace River continues to break up into the Peace-Athabasca Delta.

Fort McMurray, which is part of the Regional Municipality of Wood Buffalo, deployed five damage assessment teams, particularly for commercial properties. Photos began to surface of unprecedented massive ice chunks that had been deposited onto a local golf course as a result of the river breakups.

Disaster relief units deployed by Samaritan’s Purse Canada to Fort Vermilion and Fort McMurray said that, in addition to both areas dealing with the COVID-19 pandemic, residents in Fort McMurray are also grappling with the economic challenges caused by low oil prices. Furthermore, many residents have not fully recovered from the 2016 wildfire that destroyed more than 2,000 buildings, most of them homes, the organization’s leaders reminded.

“I can’t imagine how traumatic this must be for both communities,” Brent Davis, Samaritan’s Purse project director, said in a statement to media. 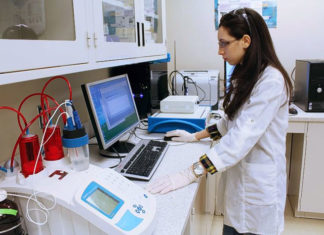