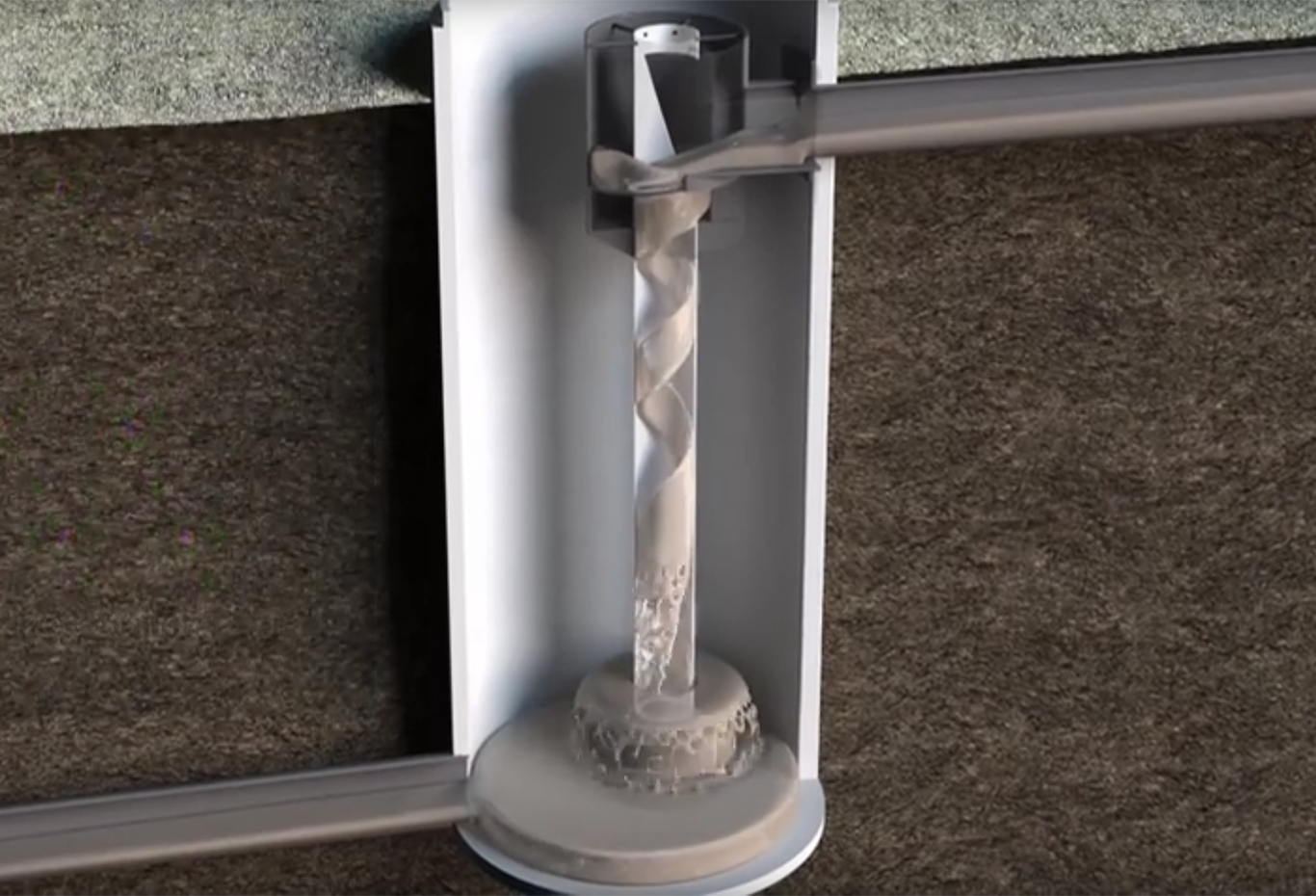 In 2010, the Town of Newburgh, Indiana began an investigation to study alternatives to their chemical injection system. They were continuing to get odour complaints about their new force main line, even while using the chemical injection system which was supposed to eliminate these. They retained a consultant that specialized in odour control to address the problems.

After test trials using chemicals recommended by the consultant were completed, the conclusion was that the Town was using the best chemical treatment and delivery method available at the time. However, during extended periods of low-flows, levels of hydrogen sulphide gases emitted from the system were unacceptable, reaching lethal limits at times.

The next study focused on eliminating water column separation occurring at the end of each pump cycle originating at the master lift station. At the start-up of the pump cycle, air is expelled as the water columns rejoin. Water column separation occurs when the flow inside the pipe loses potential energy as it approaches equilibrium. This causes inefficiencies to occur at the pump station for each start-up cycle.

Air release valves were installed along the route at high points in the system for the primary purpose of expelling large volumes of air at the beginning of each pump cycle. Air must be forced out as the wastewater is transported or an air lock will occur, severely reducing pumping capacity. Each time air is expelled during the start-up cycle, pungent odours are released. This is the result of the decaying waste creating hydrogen sulphide gases.

Proposed ideas to correct this problem focused on the use of a pressurized force main system. In order to meet this objective, the idea of a standpipe static pressure system was investigated. This system would need to be located at or near the headworks of the treatment plant.

The highest point in the force main system was located at an air release valve approximately 1.5 km away from the wastewater treatment plant (WWTP). The area surrounding the air release valve received the greatest amount of logged complaints. Meters measuring the level of SO2 in the system showed spike concentrations in the neighbourhood of 1,000 parts per million. Concentrations this high are highly corrosive and potentially lethal in confined spaces. To maintain positive pressure in the force main, it was necessary that a tower for the standpipe be constructed higher than the highest point in the system.

At the time these concepts were being developed, the WWTP was undergoing a $22-million expansion project. Commonwealth Engineers, Inc. (CEI) was retained to complete the studies, the design and construction engineering. Quick action was necessary to take full advantage of the mobilized construction operation. Due to the septic nature of the wastewater, the design needed to address odour at the WWTP. In addition, low dissolved oxygen levels in the raw wastewater entering the headworks of the plant needed to be addressed.

After the study phase was completed, CEI designed the standpipe system at the WWTP headworks. It consisted of a 300 mm flanged ductile iron pipe, vertically mounted on the inside of the tower, suitable for freeze protection during winter. At the top of the tower, a rectangular trough was cast in place to guide influent into a Vortex Flow Insert from IPEX.

How the insert works

This technology eliminates odorous emissions and minimizes corrosion in vertical drop sewers. Its patented spiral flow design eliminates odourous and corrosive gases in a unique way. It uses the wastewater’s own flow energy to suppress the turbulence which releases noxious gases.

The spiral flow creates a downdraft which traps airborne gases and forces air into the sewage flow to oxidize odourous gases.

By installing a Vortex drop structure, municipalities can save chemical feed, air-phase treatment and maintenance costs. Also, developers can cut excavation costs in areas where conventional drop structures are not allowed.

Reinforced fibreglass grating was installed over the top of the tower. Existing pumps at the lift station 11 km away did not need to be modified to deliver adequate flows to the standpipe tower containing the Vortex.

Utilization of this design option solved the odour issue completely. Levels of hydrogen sulphide gases in the air release valve manhole soon went from several thousand parts per million to almost zero. With the use of an OdaLogger, levels of H2S measured at the inlet to the Vortex were an average of 138 ppm, and 4 ppm at the bottom.

In addition to the odours being completely eliminated, the Town is saving $250,000 annually in operation and maintenance costs.