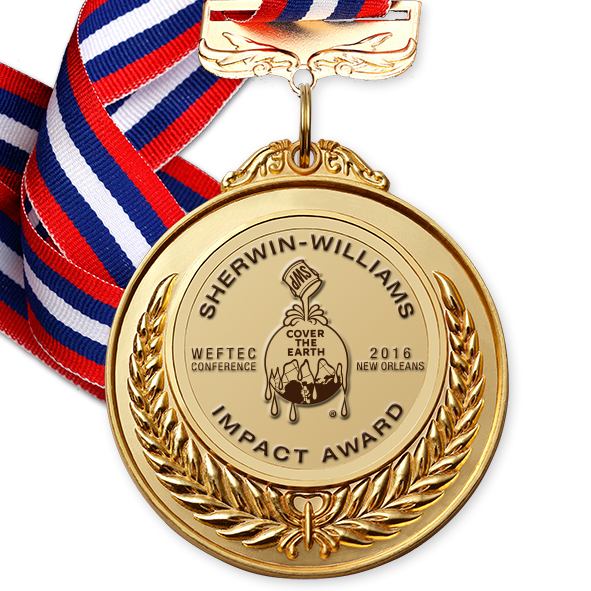 Short Elliott Hendrickson Inc., Champion Coatings, and Wapasha Construction took top honors in the inaugural Sherwin-Williams Impact Award program for their rehabilitation of a domestic anaerobic digester for the city of Austin, Minnesota.

Their winning project addressed the challenges of restoring two nearly 60- and 80-year-old domestic anaerobic digesters for the city of Austin. The city operates three domestic anaerobic digesters that were constructed between 1938 and 1959, including two with concrete covers. The original structural concrete was still sound, but concrete used in the 1980s to rebuild the digester mixer bases had become severely deteriorated.

The contractors experienced several challenges related to operating and weather conditions, as well as the age of the digesters. Due to numerous cracks in the digester cover prior to repairs, fluid in the lower tank was escaping and reducing the tank pressure. Therefore, crewmembers had to confirm that the tank would hold pressure after completing the repairs. It didn’t after the first repair application, so they reapplied the SherFlex Elastomeric Polyurethane and tested the pressure. Again, the tank didn’t hold pressure.

After much troubleshooting, crewmembers discovered a difficult-to-access cold joint that needed to be filled. They carefully repaired the cold joint and realized success, with the tank holding pressure on the next test.

Due to the climate and a cold winter, it took nearly six months to adequately coat the first tank and get it ready for service. With the lessons learned from that tank, the contractors made some adjustments and were able to repair the second tank faster and without issues.

For more information on the Impact Awards, visit: www.sherwinblogs.com/impact-award

Oct 20, 2021
Little progress has been made over the last decade when it comes to nutrient pollution from agriculture, a new European Commission report shows. Nitrates from...