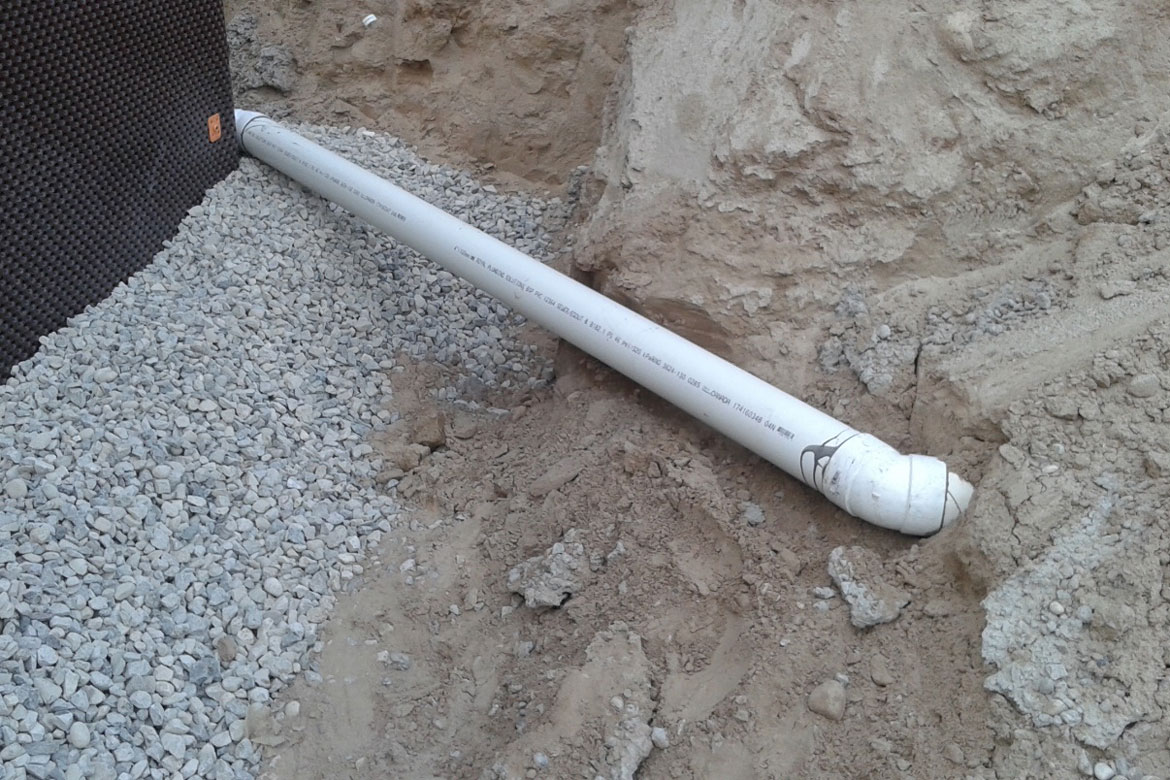 Unacceptable amounts of inflow and infiltration (I/I) in new construction have been identified as a significant issue, particularly with the advent of more frequent and more intense rainfall events. As it can account for 50% of total I&I, proper construction of the sanitary sewer lateral on the private side (defined as the “sanitary building sewer” in Canadian building codes) is an important factor in this issue.

The building code governs the construction of sewers on the private side. There are a few pressing areas in which the Ontario Building Code (OBC) is not sufficiently protective of I/I. Sources of I/I on the public side, however, are extensively studied and well understood, if still occurring.

The collection of new subdivision flow monitoring data since 2015, and ongoing detailed surveys of municipal staff and stakeholders has allowed the identification of many significant contributing factors that need to be addressed in the development process.

Hundreds of building inspectors, building plumbing inspectors and chief building officials have been consulted over the course of this work. A variety of new subdivision construction sites were visited and construction, inspection and testing procedures were observed first hand by shadowing building inspectors. An important part of this project was to share information with building departments and educate them on I/I issues.

Potential I/I sources on the private side

Of extreme importance is the fact that the Acceptable Solutions in the OBC are preceded by Objectives related to Health & Sanitation, and Functional Statements, which are more detailed and lay out the goals of the Code. Several of the Functional Statements in the Code relate directly to I/I, including the need to limit excessive demand on downstream infrastructure, and to minimize injury as a result of contact with sewage.

There are many areas where Acceptable Solutions in the OBC differ markedly from public side requirements and are not protective against I/I, including bedding and backfill, jointing, and connection of the sewer at property line. Construction practices are also a factor in the success of private side pipe construction.

Bedding and backfill of private side lateral

Installation of pipe is covered extensively in Ontario’s Public Standards and Specifications (OPSS and OPSD), which are used by 95% of municipalities. It is also referenced in Ontario Sewer Design Guidelines. As described in OPSS 401, the embedment shall be placed as per the bedding and backfill. Bedding needs to be placed in uniform lifts not more than 300 mm in thickness and compacted to 95% dry density.

Then, backfill continues to 300 mm above the crown of the pipe, again compacted to 95% dry density. The embedment material for flexible pipe must be Granular A, B, or unshrinkable fill.

The OBC, by contrast, provides a single sentence in the code with reference to an Appendix. It is not prescriptive – “a base that is firm and continuous” is vague. There is some clarification provided in an Appendix, but Appendices are not legally part of the Code.

Jointing of private side lateral

Ontario Design Guidelines are very clear with respect to joints. The types of joints selected and the materials used should be designed to minimize infiltration and to prevent the entrance of roots throughout the life of the system.

OPSS 1841 requires that PVC pipe, including sanitary laterals, have gasketed, bell and spigot joints. This is presumably based on years of engineering study of pipe strength, quality and performance (as enshrined in OPSS Standards). Indeed, many municipalities are now requiring the stronger SDR28, rather than the required SDR35 pipe, for the public side lateral.

By contrast, the OBC permits a thin-walled, glued pipe to be installed on the private side (per CAN/CSA-B182.1). This pipe is fragile and since rigid, glued joints result in a single unit from the house to the property line, it is much more prone to breakage than the thicker-walled, gasketed pipe installed for the public side lateral. The potential for I/I increases, and the lifespan of the pipe decreases.

Connection of lateral at property line

Inspection of the lateral connection at property line is essential to ensuring that I/I does not occur. Since the sanitary sewer system on the public side, including laterals to property line, are constructed, buried and tested before building permits are issued, the inspection of this connection falls to building departments. At this point in the development process, engineering groups are not typically involved.

The OBC does not explicitly require the inspection of this connection. It does have “prescribed notices” which specify when the chief building official must be notified that the drainage systems are ready for inspection and testing. It does not specifically include or exclude the connection at property line. However, many jurisdictions across Ontario are not currently performing this inspection.

The connection of the sanitary lateral at property line is a major source of I/I in existing systems. This is likely because of differential settlement due to the timing of the installation of the pipes on each side of the property line, as well as the disparate pipe types used and the need to connect them with appropriate fittings.

Another issue of note pertains to the installation and inspection of stormwater infrastructure on the private side. Currently, only about 50% of building departments in Ontario are inspecting storm infrastructure, although I believe the OBC requires that it be performed. I am working with building officials to clarify this issue.

Some contractors and others in the field have advised that they feel it doesn’t matter if storm pipes leak, as they carry clean water anyway. Thus, stormwater piping is sometimes installed with much less care than sanitary piping. This represents a significant risk, because stormwater sewers are sized to convey a design storm rate of flow, not a design storm flow, plus groundwater I/I.

Incorrectly or inadequately laid pipe on the private side has many mechanisms by which I/I can be introduced into the sewer system. Firstly, gaps at joints, due to either inadequate jointing or inadequate bedding, can introduce I/I over the long term. Secondly, if there are gaps, the bedding will slowly degrade. As the fines migrate into the pipe, the remaining bedding is likely to shift, increasing the gaps and allowing larger and larger soil particles into the pipe and increase shifting of the pipe. Inadequately laid pipe can be a direct contributor to flooding.

The insurance industry in Canada indicates that the majority of payments associated with basement flooding are related to private side issues.

It is presumed that the average house will last 70 – 100 years. However, there is currently no messaging to homebuyers that their private side laterals have a finite design life and need periodic replacement. It does not appear to me that the thin-walled pipe being installed currently has a design life of 70 – 100 years. Nor does it appear that we are adhering to the Functional Statements in the OBC, when allowing installation of pipe which is prone to I/I.

Permitting glued joints introduces the risk of user error during construction. Many contractors and building inspectors pointed out that there are a variety of solvent cement types, depending on the materials being connected, and that sometimes one is substituted for another for expediency. This may partially explain the frequency with which connections are found to be leaking.

Fully half of the length of an entire sewer system exists on the private side and falls under the jurisdiction of the Ontario Building Code. The engineering industry has generally had very little contact with building departments, and in most jurisdictions, engineering/development staff advise that they have never sat down with building department staff to discuss I/I issues and their importance.

Compared to the cost to treat one litre per second of I/I for one year of $80,000 (@ $2.75/m3), improvements to the building code are an investment well worth making. Inflow and infiltration from the private side costs the same as it does from the public side.

The author gratefully acknowledges the funding of this project by the Regions of Peel, Halton, York and Waterloo, the Cities of London, Windsor, and Cambridge, the Town of Orangeville, and the Institute for Catastrophic Loss Reduction (ICLR).

In addition, contributions from professionals from both the engineering and building communities have been invaluable.