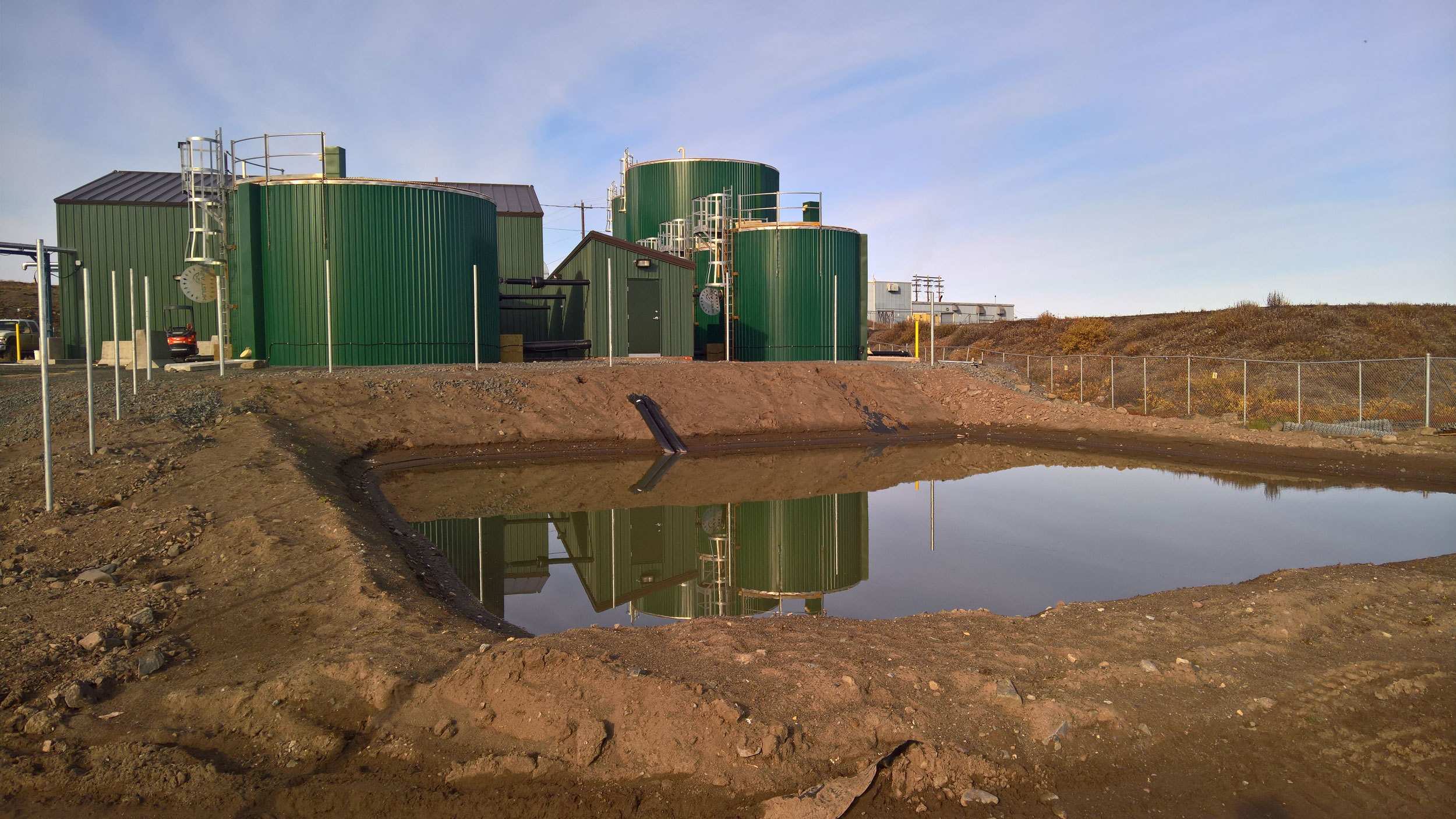 The water treatment plant upgrade for the hamlet of Kugluktuk is one of the few modern Nunavut plants built by shipping construction materials to the remote Arctic location rather than as a factory built modular plant.

Most tanks are concrete or field welded steel, but Kugluktuk’s were built on site with factory fabricated and coated panels that are bolted into place. Bolted tanks have the strength of steel and require less site work than concrete tanks. Below ground concrete tanks would also not be compatible with the geological and permafrost conditions.

The idea for bolted tanks came from Williams Engineering, in Yellowknife. NDL Construction was contracted to construct the water treatment plant building, having also built the sewage lagoon and carried out other work for the hamlet.

BI Pure Water of Surrey, BC, designed and supplied the water treatment system, which was factory fabricated and shipped in 15 pre-assembled modules, including the clarifier, pumps, UV and dosing systems, truckfill arms, pump and integrated PLC and HMI.

Western Tank & Lining shipped the tank sections in pallets and seacans from St. Catharines, Ontario, via the Atlantic route with Nunavut Sealink & Supply. They arrived in July which was well into the construction season. Favourable weather conditions, a rarity at this latitude, enabled the eight bolted tanks to be assembled in a matter of weeks, as compared to welding, which could have taken more than one full construction season.

Western Tank and Lining began by building the roof on the ground and using hydraulic jacks to gradually build up each ring, avoiding the need for a crane, which was not available in Kugluktuk. The tank finishing/painting was all done in the factory before shipping, which saved pollution and waste from paint, not to mention trying to paint in Arctic Ocean winds. When the bolting was complete, the tanks were then left until the following summer for insulation and exterior panel cladding work.

The water treatment system assemblies also arrived in the summer of 2015. They were trucked 2,200 km from Vancouver to Hay River, NWT, then loaded on the last summer barge on the Mackenzie River for a 1,700 km journey to the Arctic Ocean. The last stage was a 1,000 km trip through the Northwest Passage to Kugluktuk. This route is now possible with increasing polar ice melt.

“It was an unknown whether the bacterial Schmutzdecke would grow with the cold temperatures experienced in the north.” says Steve Creamer of Williams Engineering in Yellowknife.

Key benefits of slow sand filters for the North are their low maintenance and few parts that break down or need replacing. Neither do they require many chemicals or electricity to operate. One of the goals of the government of Nunavut was to reduce chemical and fuel usage. Although less fuel is needed to pressurize the system, the water has to be heated. A lot of fuel is required to warm the water for the Schmutzdecke, costing about $10,000 a month to operate in the cold period.

“Design is always a cost-benefit comparison,” says Creamer. “The cost of cartridge filters was compared to the price of heating the water, and heating came out to be less expensive.”

Construction of the upgraded treatment plant was almost complete by the fall of 2016. However, the Schmutzdecke hadn’t developed and turbidity was still higher than the required level. NDL Construction called on Ken Mattes, who is the senior manager of the Canadian First Nations Circuit Rider program and also oversees the Manitoba operator training program at Red River College in Winnipeg, to train the Inuit operators and to help coax the Schmutzdecke into developing.

“I was surprised they went with slow sand filtration as we usually see nano filter membranes with pre-filtration,” says Mattes. However, the Schmutzdecke had soon developed and the turbidity was reduced to below 1 NTU.

Raw water feeding the new treatment plant is continuously monitored for salt water intrusions, as this community is on the shore of the Arctic Ocean. The salty tide water flows upstream on a daily basis, creating a problem when the tides are high.

Today, thanks to the work of the Inuit operators, the Kugluktuk plant is one of the best performing plants in Nunavut, with high quality water exceeding turbidity guidelines.

What is environmentally conscious building?