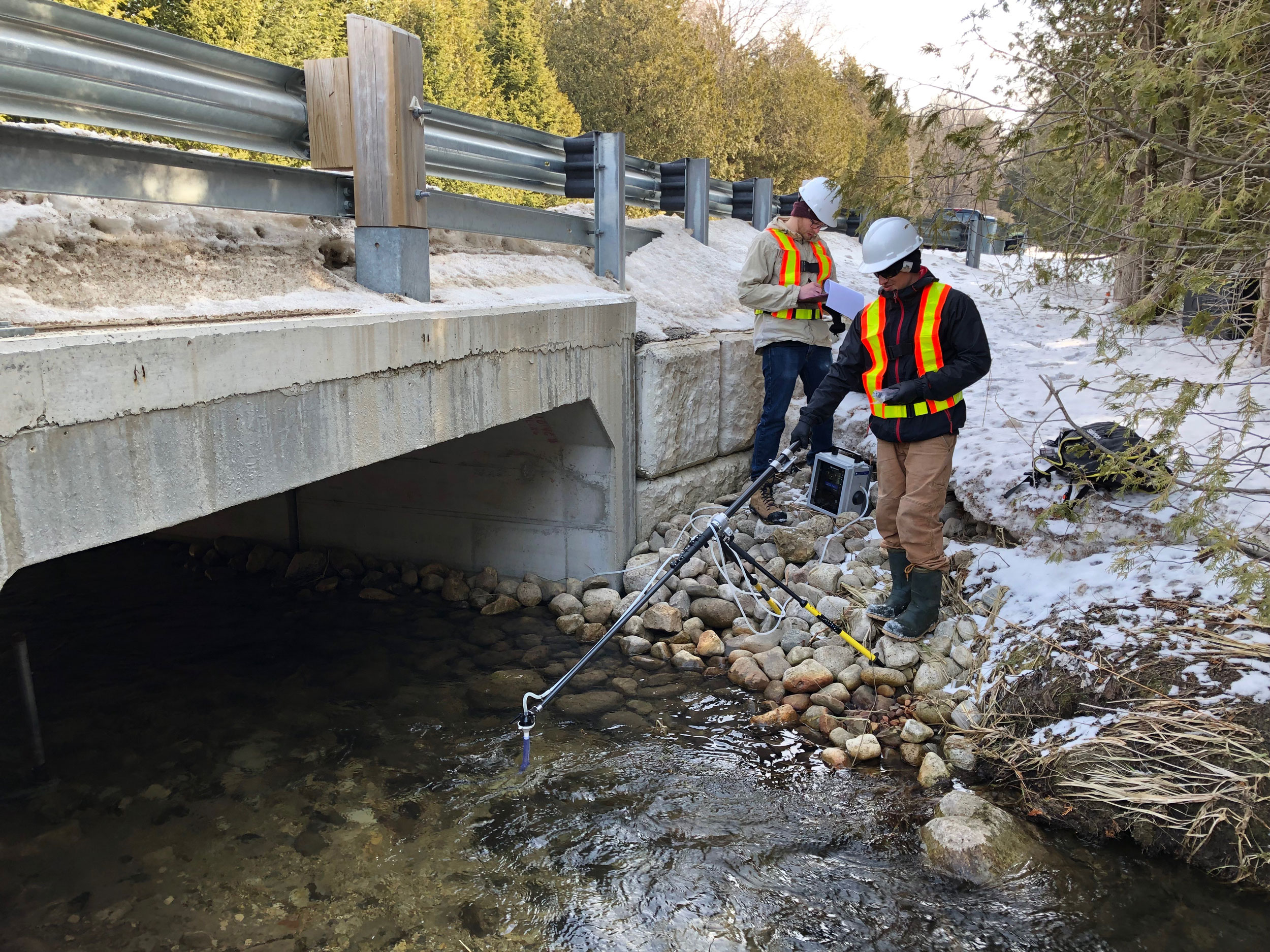 Measuring the success of site remediation projects can be challenging, but an emerging technology known as Environmental DNA (eDNA) provides a new tool to help.

eDNA methods can provide conservation biologists and environmental consultants with a way to measure the total biodiversity of a restored ecosystem, or to check for certain indicator species which can indicate habitat use and ecosystem health. It is a new and innovative method, which is used to survey for the presence of organisms in a given environment. eDNA science has been researched intensively all over the world for the last decade and has been developed to the point of commercialization.

It is now a readily available tool for environmental consultants, conservation groups, and government entities. eDNA methods offer several advantages when compared to conventional biomonitoring survey methods. These include reduced costs and time to results, increased sensitivity, and reduced environmental disturbances. These advantages translate to reliable results at a lower cost for restoration projects.

Every species on Earth has unique DNA that sets them apart from all others. eDNA is identified using specialized genetic tests that will identify what species it came from.

There are two main methods used to detect eDNA. The first is a targeted approach through which a species-specific genetic test is used to detect the eDNA of a single target species. This involves the use of quantitative polymerase chain reaction (PCR), an incredibly sensitive technology that originated in medical diagnostics.

The second, a more general approach, is DNA metabarcoding, which is used to identify the DNA of all organisms present in the environment, providing a “snapshot” of the total biodiversity at a particular point in time. Both approaches are highly sensitive and can provide valuable insights into what is going on at a biological level within an ecosystem.

The most advanced uses of eDNA are in aquatic environments. Typical surveys consist of sampling water to capture eDNA, and using molecular biology to purify and detect target DNA. Specialized eDNA sampling equipment has been developed for these purposes by a few companies, including Guelph, Ontario-based Precision Biomonitoring Inc. This allows eDNA surveys to be conducted in many different aquatic environments, from shallow rivers to deep lakes. Field biologists need only sample water for eDNA. There is no disturbance to aquatic organisms, or the ecosystem as a whole. All types of aquatic organisms can be detected using eDNA, including fish, amphibians, reptiles, molluscs, insects, and even microbes.

One interesting application of eDNA is in detecting the changes in microbial communities at sites where chemical or effluent runoff is a concern. This application can also be adapted to determine the effectiveness of microbes employed for bioremediation, such as hydrocarbon metabolizing bacteria introduced to clean up a petroleum-contaminated site. eDNA can also be readily sampled from soil substrates, on land or in aquatic environments, making it an applicable method for different types of site remediation endeavours.

Not all eDNA surveys are created equal. Special considerations should be taken into account when designing a survey and sampling, so as to optimize the probability of detecting an organism to provide the most robust survey.

Experts in the field of eDNA agree that there are best practices related to eDNA methods. It is widely understood that the distribution of eDNA depends on several variables, including species ecology, water quality, pH and turbidity. It is for this reason that understanding the ecology of eDNA, and how best to sample for it, is so crucial.

When looking to conduct an effective eDNA survey, one should always adapt the best practices to their survey. A well designed eDNA survey takes into account target species biology and ecology. For example, detecting salmon during spawning season would be optimal as they are shedding a lot of DNA through reproductive activities. Environmental variables need to be taken into account as well as they can influence the dispersion and longevity of eDNA in the environment. Variables such as water pH and flow must be accounted for during the survey design process to determine the optimality of sampling for a given project.

Another important factor to consider when conducting eDNA surveys is sample preservation. Transporting water samples introduces significant opportunity for eDNA to degrade, as well as being logistically difficult. eDNA degradation results from high temperatures, chemicals present in the water, microbial activity, and many other factors.

Immediately after sample collection, eDNA can begin to degrade if not properly preserved. Therefore, preservation is of the utmost importance and should always factor into a survey workflow. Filtering water and extracting DNA in the field is the best approach to minimize the potential for sample degradation prior to analysis. On-site DNA extraction ensures that the sample is stable and ready for immediate analyses in the field, or for transportation to an analytical centre.

One final consideration to take into account is the quality of the laboratory tests used. Robust eDNA analysis should include the use of genetic tests developed under the most rigorous molecular biology standards. Analysis should also include controls to check for PCR inhibition which can result in the masking of eDNA.

Restoring natural areas and ecosystems is a common environmental practice. Efforts focus on alleviating the detrimental effects caused by development projects in several major industries, including construction, mining and agriculture. One of the pitfalls in measuring the success of site remediation and ecological restorations is that it is often difficult to assess their effectiveness without incurring high costs or causing further disturbances to the very ecosystem being remediated.

Difficulties in measuring the effectiveness of site remediation can lead to underestimation of the success of a project, which may lead to projects being cut short before the objectives can be realised.

eDNA methods are praised by many professionals as revolutionary for the field of ecology. They have been proven numerous times to possess higher levels of sensitivity compared to conventional survey techniques. This makes eDNA particularly useful when surveying for low abundance species and species at risk, which are often the focal point of ecological restoration projects. This increased sensitivity reduces the likelihood of false negative results, that is, misidentifying an organism as absent when it is in fact present.

Ramifications of false negatives when surveying for organisms, especially species at risk, can be very detrimental and may erroneously result in the cessation of conservation or restoration efforts and the local extinction (extirpation) of species at risk from an area.

Ecological restoration projects focus on alleviating the damaging effects of an ever-expanding industrial world. These projects aim to bring back a natural balance to an ecosystem by recreating suitable habitats and niches for different species, while also restoring fundamental ecological processes. An example of such a project could be the restoration of riffle habitat in a riverine system in an effort to bring back once native fish species. However, measuring the success of such restoration projects can be difficult due to a variety of reasons.

Conventional surveys for fish, such as electrofishing, can be labour intensive, are highly disturbing to fish and other organisms, and can be costly to conduct over large areas. These types of surveys also depend on physical identification of species, which is time-consuming and often requires significant expertise. eDNA offers a way to survey for aquatic organisms efficiently, while causing little to no disturbance to organisms and their surrounding environment.

Using eDNA to detect certain keystone or indicator species provides valuable insights into the results of a project. For example, the brook trout is a useful indicator species in Ontario as it is sensitive to environmental disturbances to its habitat. Changes in water temperature or the loss of riffle habitat (which is used for spawning) as a result of stream impoundment can cause them to be extirpated from an area.

In fact, eDNA was used to validate the results of a river remediation project in Northern Ontario. The aim of the project was to restore brook trout spawning habitat after disturbances caused by an industrial operation. In this case, eDNA was used to detect where the brook trout had returned to, with higher sensitivity than conventional double-pass electrofishing. This case study illustrates the high sensitivity of eDNA as well as the benefits it can provide to remediation projects.

When used properly, eDNA can be an invaluable tool for site remediation projects. Determining the early signs of success of a project helps to identify areas wheere further improvements could be made, leading to rapid action and an overall increase in the effectiveness of restoration efforts.

Oct 20, 2021
Little progress has been made over the last decade when it comes to nutrient pollution from agriculture, a new European Commission report shows. Nitrates from...