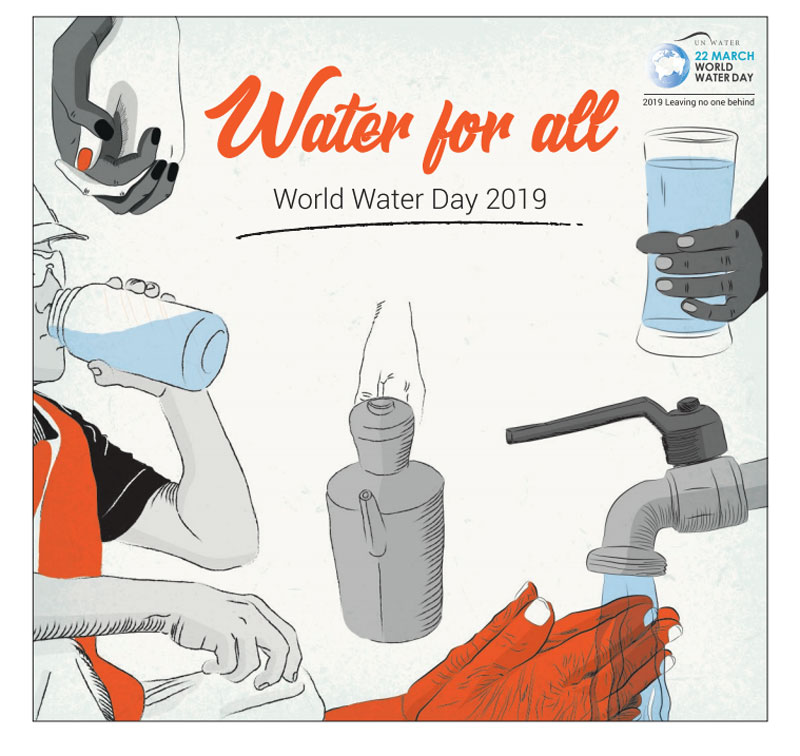 Since 1993, World Water Day has been celebrated globally in a variety of educational and awareness raising events. Organized by the United Nations, the theme for 2019 is “Leaving no one behind”. To help you recognize and celebrate World Water Day, ES&E Magazine has put together a list of events across Canada.

Edmonton: World Water Day YEG 2019, March 22 at 4:30 PM
Meet and network with inspired water collaborators, learn about local water initiatives in the province of Alberta, and listen to forward-thinking solutions on freshwater issues. Water is essential for life, and is the single most important resource on the planet.

Nelson: Speakers, Short documentary & Prizes for World Water Day
March 22 at 7 PM
The Nelson chapter of the Council of Canadians will be hosting an event at the Adventure Hotel for World Water Day in collaboration with a number of other water focused groups with the emphasis on education and engagement around protecting our precious resource.

Fredericton: Cascade: Our plastic; our planet; our choice
The University of New Brunswick Art Centre celebrates World Water Day with a look at the lifecycle of plastic and how plastic pollution affects our water systems.

Toronto: World Water Day Fair at Ryerson University
Ryerson Urban Water and Sustainability Ryerson are partnering to host a World Water Day Fair to showcase all types of work being undertaken at Ryerson related to water. We are welcoming all of you to join us in exploring this year’s theme “Leaving no one behind,” and to connect with like-minded students, researchers, faculty, staff, and groups that are making a splash in the water sector.

Waterloo: World Water Day 2019 hosted by the Water Institute
Join the University of Waterloo’s Water Institute for a full day of activities as they explore together how to find viable solutions for marginalized people living without safe water.

Charlottetown: Screening of Anthropocene at 7 PM
Join the PEI Council of Canadians chapter for a free movie screening of The Anthropocene: the age of mankind, followed by a discussion for World Water Day at the Holland College Lecture Theatre.

Montreal: Maude Barlow in Montreal: Who owns the water?:
Honorary Chairperson of the Council of Canadians, Maude Barlow, will speak with Alice-Anne Simard, director of Eau Secours, on the fight for the human right to water, the companies trying to take ownership of water and sell it, as well as her experience with communities around the world who are already facing the global water crisis. **The conference will be in French and English. UQAM, Montreal, Quebec.

Saskatoon: World Water Day at the University of Saskatchewan 1 PM

The University of Saskatchewan’s Global Institute for Water Security is celebrating World Water Day in unison with the United Nations theme of “Leaving no one behind”.

The public works department for Ontario’s Regional Municipality of Durham is lighting up its headquarters in blue all week to celebrate Canada Water Week. It’s just one of the many ways Canadians are paying tribute to World Water Day for 2019.

“Canada Water Week and World Water Day provide an important reminder on how fortunate we are to have a clean, secure and convenient supply of drinking water,” said John Presta, Durham’s Director of Environmental Services, in a statement for World Water Day. “Residents can help protect this valuable environmental resource for the coming generations with effective water conservation today,” he added.

Also in Ontario, but in a more political mode for World Water Day 2019, the Association of Iroquois and Allied Indians is asking citizens to show up wearing blue for a rally in the city of London. The group, aligned with The Council of Canadians, is ramping up efforts to stop the practice of bottled water companies using First Nations areas as water sources.

“It damages the environment, steals from communities both environmentally and economically and they make billions while only giving back a small amount,” the organizers announced for the Victoria Park event, which also includes a water ceremony and prayers.

Despite the lack of First Nations access to safe drinking water, Canada still has the second-highest water consumption rate in the world, just behind the U.S. According to Environment Canada, the average Canadian uses an astounding 343 litres of water residentially per day.

The new World Water Development Report around the same theme, Leaving No One Behind, was released earlier this week ahead of World Water Day on March 22. The report discusses barriers faced by refugees and internally-displaced people around accessing water supply and sanitation services. More than two billion people live in countries experiencing high water stress, and about four billion experience severe water scarcity during at least one month of the year.

“It is insane that often in slum areas, people have to pay more for a volume of water than people living in better-off neighbourhoods,” Stefan Uhlenbrook, UNESCO World Water Assessment Programme co-ordinator, said at a press launch for the report.

Uhlenbrook pointed out that poorer areas can pay up to 10-20% more for not having piped-in access to water and sanitation and “depend on water vendors, kiosks and other things”.

This fact awareness video by UN Water highlights some of the issues around the 2019 Leaving No One Behind theme. Meanwhile, the Al Jazeera news organization has assembled a list of some other compelling water documentaries made from all around the world to enjoy on World Water Day.

Audrey Azoulay, Director-General of The United Nations Educational, Scientific and Cultural Organization, better known as UNESCO, released a statement on the theme of Leaving No One Behind for World Water Day 2019 after the launch of the new water report.

“This is the most important issue: the intensification of environmental degradation, climate change, population growth, and rapid urbanization–among other factors–pose considerable challenges to water security,” announced Azoulay. “The report advocates for a boost to international political will to reach those marginalized and to tackle the existing inequalities, whether they be socio-economic, gender-based due to the particular challenges of urban rural or settings, or any other factor,” she added.

On April 26 and May 10, people across Canada will participate in the WE Walk for Water campaign to help lift communities out of water poverty by fundraising or hosting their own water walks.

“Last year, over 200,000 youth from across Canada, the U.S. and the UK collectively delivered clean water for life to 40,000 people through the inaugural WE Walk For Water campaign,” said Craig Kielburger, co-founder of WE. “With over 40% of the world’s population still affected by water scarcity, we hope to double our impact this year by turning clean water on for 80,000 people. I can’t wait to see the wave of impact these young change-makers will have again this year.”