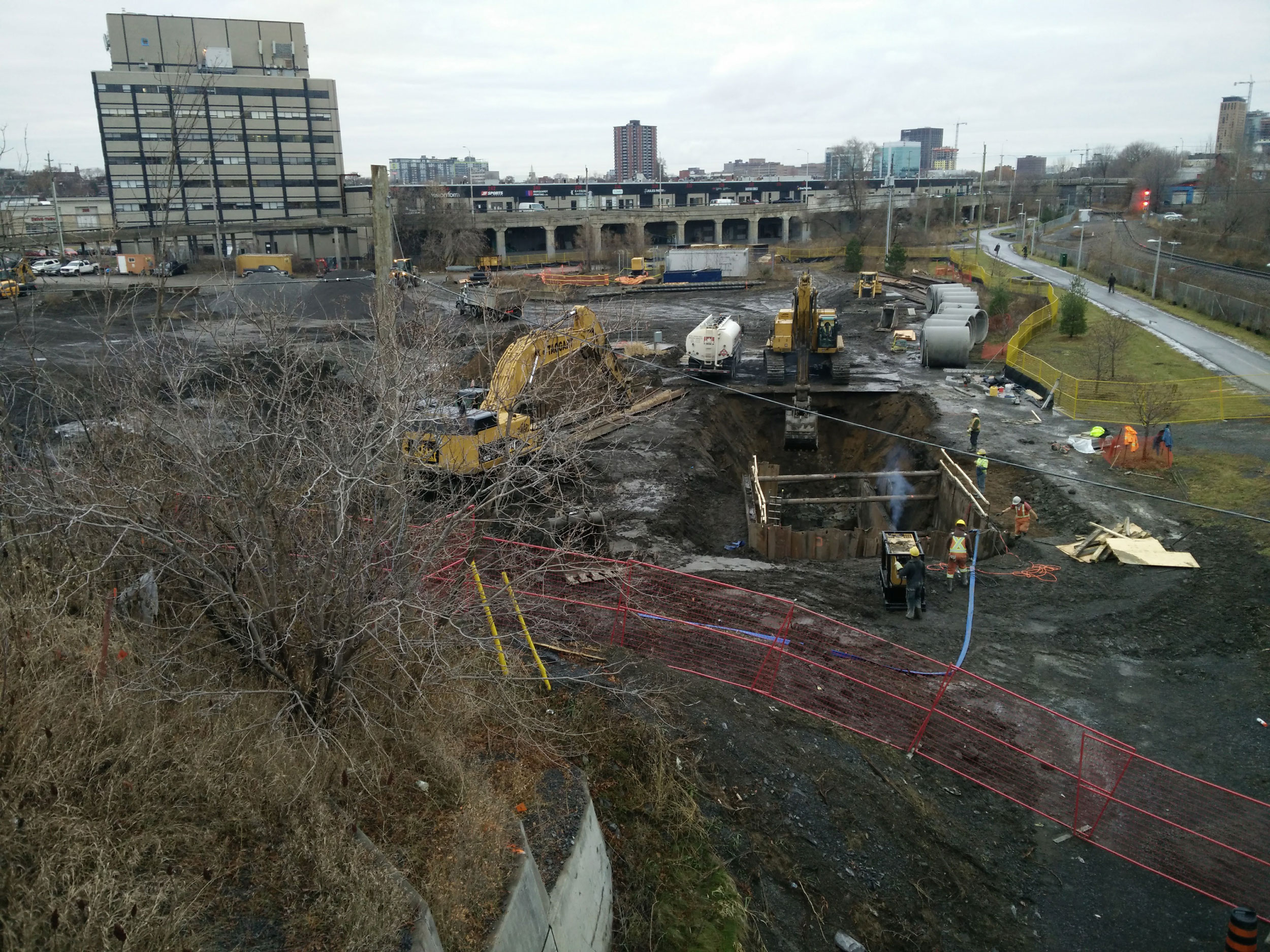 Once WSP had obtained the necessary approvals in a very tight timeframe, advanced engineering methods such as hydraulic modeling, microtunnelling, innovative shaft construction techniques, and the selection of reinforced concrete pipe, made this project possible.

Within the project area is an abandoned rail yard, which had contaminated soil. Also, future developments nearby will subject the ground to blasting, heavy truck traffic, and an increase in cover by several metres in some places due to backfill. So, the pipe selected needed to be reliable, sturdy and able to withstand disturbances.

Reinforced concrete pipe (RCP), with a service life of 70 to 100 years and an innate structural strength with reduced dependence on bedding, was the natural choice for the sanitary and storm sewers in this project.

A smaller-than-standard pipe diameter was essential to the creation of an alignment that missed existing infrastructure, while maintaining the fixed and very shallow slope of the pipe. Refining of the hydraulic modelling with more advanced 3D techniques assured the City that a smaller pipe was hydraulically sufficient.

The downstream connection point of the storm sewer was extended to the north side of Albert Street in order to mitigate the negative impacts on the sewer hydraulics. Two bends of 50 degrees, rather than two of 90 degrees, were used for the extension, resulting in considerable gains in hydraulic efficiency.

The resulting solution to reduce the pipe from 2,400 mm to 1,800 mm not only made the project technically feasible, but also made microtunnelling a much less expensive option.

WSP’s development of the 3D hydraulic models for the proposed sewer alignments provided the required assurances to the City. This also allowed for the refining of previously developed friction loss calculations, and the numerical modelling of the concrete benching in the large maintenance holes to optimize hydraulic efficiency in the sewers.

The site’s location on the busy Albert Street thoroughfare, which is a major transit route and an arterial road, presented an additional set of challenges due to the City’s firm directive that there could be no impact on traffic flow. WSP’s team also had to address issues such as the extension of the reconnection point, and the addition of a new connection point which, at 13 m below grade, could potentially impact the LeBreton Flats development.

Their solution involved using microtunnelling technology, which involved minimal disruption to the surface and minimized the impact that the high groundwater table had on construction.

Installation of a pipe using a small tunnel boring machine (TBM) was the most practical solution, resulting in a 1,800 mm storm sewer 13 m below the street and below the groundwater table. Construction of the two shafts and the set-up of equipment took more than a month, but boring 70 m of pipe took only 11 days to complete. This type of tunneling is also referred to as the jack-and-bore method, where a three-piece tunnel boring machine is set up in front of a large jack, which is laid horizontally inside the launch shaft.

A bentonite slurry is pumped to the cutter head at the front of the TBM and used to lubricate the cutting edges, the exterior of the new pipe, and facilitate the capture of cutting spoils. Slurry is pumped to the surface where water is separated for reuse, and the earth and rock excavated by the process is stored for removal from the site. The jack pushes the TBM in as it cuts through the soil until the jack is fully extended. When the jack is withdrawn, a piece of RCP is lowered and installed behind the TBM, with a steel-collar-reinforced bell and spigot.

The jack-and-bore process is controlled with a laser manipulated by an operator, and continues piece-by-piece until it breaks into the exit shaft. While the jack-and-bore process may incur additional expenses and risks, it excels in instances like this where typical cut and cover installation would be prohibitively costly and disruptive.

Five types of shoring techniques were utilized for the Albert Street site:

Piles and lagging – Hammering steel piles into the ground and using wooden lagging between them to retain the earth.

Sheet piles – Driving interlocking steel sheet piles into the ground to create the shaft and retain the earth.

Secant piles – Drilling piles into the ground and backfilling them with concrete in a concentric design, so that they will exert force on each other and hold back the earth outside the shaft.

Sunken caisson – Framing and pouring a concrete ring and then excavating inside and under the ring, allowing it to slide into the ground. The forming, pouring and excavating are repeated, until reaching a desired depth where workers pour a watertight concrete slab.

Trench box – A rigid box is moved along the trench to support excavation slopes and protect workers as pipe is installed.

The sunken caisson and secant pile techniques are not generally used for sewer construction and installation. However, the project team decided to use the approach in this instance, and successfully achieved their objectives, despite site limitations.

Julian Bratina is with WSP. This article appears in ES&E Magazine’s February 2019 issue.