A geographic information system (GIS) analyzes spatial data used in land information management. Data are collected by earth-orbiting satellites, air- and sea-borne sensors, and ground-based instruments, then processed and interpreted using computers and software programs. In 2011 and 2012, a GIS was created to assist in the restoration and remediation of 0.8 km of the Moira River shoreline, where it flows through an abandoned mine site.

Software captures and manages the geographic features and integrates attribute or descriptive information about such features in one single relational database environment. GIS is not just an improved, digital version of the traditional paper map.

It involves collecting and analyzing spatial and other data as they relate to specific geographic entities, rather than simply displaying them on a map.

Data related to a property might include the lot area, address, owner’s name, type of house, number, age and gender of occupants, school support, assessment value, type of soil, and so on. Intelligent use of these data makes GIS a very powerful technology for engineering and planning.

The global positioning system (GPS) has improved acquisition of positional data. These improvements in time, cost and methodology augment the integration of positional data with attribute data. The combination of GIS and GPS delivers spatial data that are often presented in two and three dimensional files for decision-making.

GPS is a faster option for integrating relatively far-flung project components into an overall project control network than using total station (TS) measurement for lengthy control traverses. It provides accurate connections without the need for line of sight observations between control stations, avoiding the need for cutting long bush lines for traversing. It also provides the ability to set control stations in safer locations than might have been dictated by network geometry established by TS traversing.

Geomatics professionals can be found in most businesses providing design and land information management services. Using GIS applications and GPS technology, measurement can be expected at the centimetre and sub-centimetre level of accuracy. On many projects, this level of accuracy is within the levels expected. LiDAR (light detection and ranging) may be used in the preparation of a GIS product, with layers of topographic data, forest cover, or spatial details of a settlement, and other data sets. When combined with GPS, data can be streamed to a remote base for real-time analysis.

With the implementation of GIS, professional land surveyors are able to present information to a project team, clients and regulators in a straightforward way. They can also answer questions and solve problems by looking at the data through a method that is comprehensive and easily shared.

Layers of information brought together from scientists, surveyors and engineers support the life 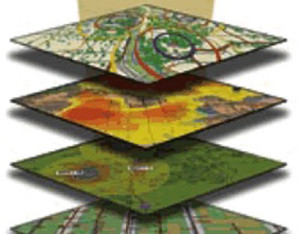 cycle of a project, while also allowing integration of data from different spectrums within thegeomatics professional’s office. Combining that information in one understandable image translates into mitigating costs and environmental impacts on projects.

Applications of a GIS with GPS technology often include environmental and natural resources applications. Such was the application of GIS for the cleanup of the Deloro Mine and refining facilities that operated on a 200-hectare property for almost 100 years, until 1989. The site is contaminated with arsenic, heavy metals and low-level radioactive waste. In 2011, a multi-year cleanup project was initiated by the Ontario government.

In 2011 and 2012, a GIS was created in AutoCad software by McIntosh Perry Surveying Inc. to assist in the restoration of 0.8 kilometres of the shoreline of the Moira River, where it flows through the abandoned mine site near Deloro, Ontario. Since then, the company has continued to build and integrate the GIS database for the areas of the site beyond the Moira River project.