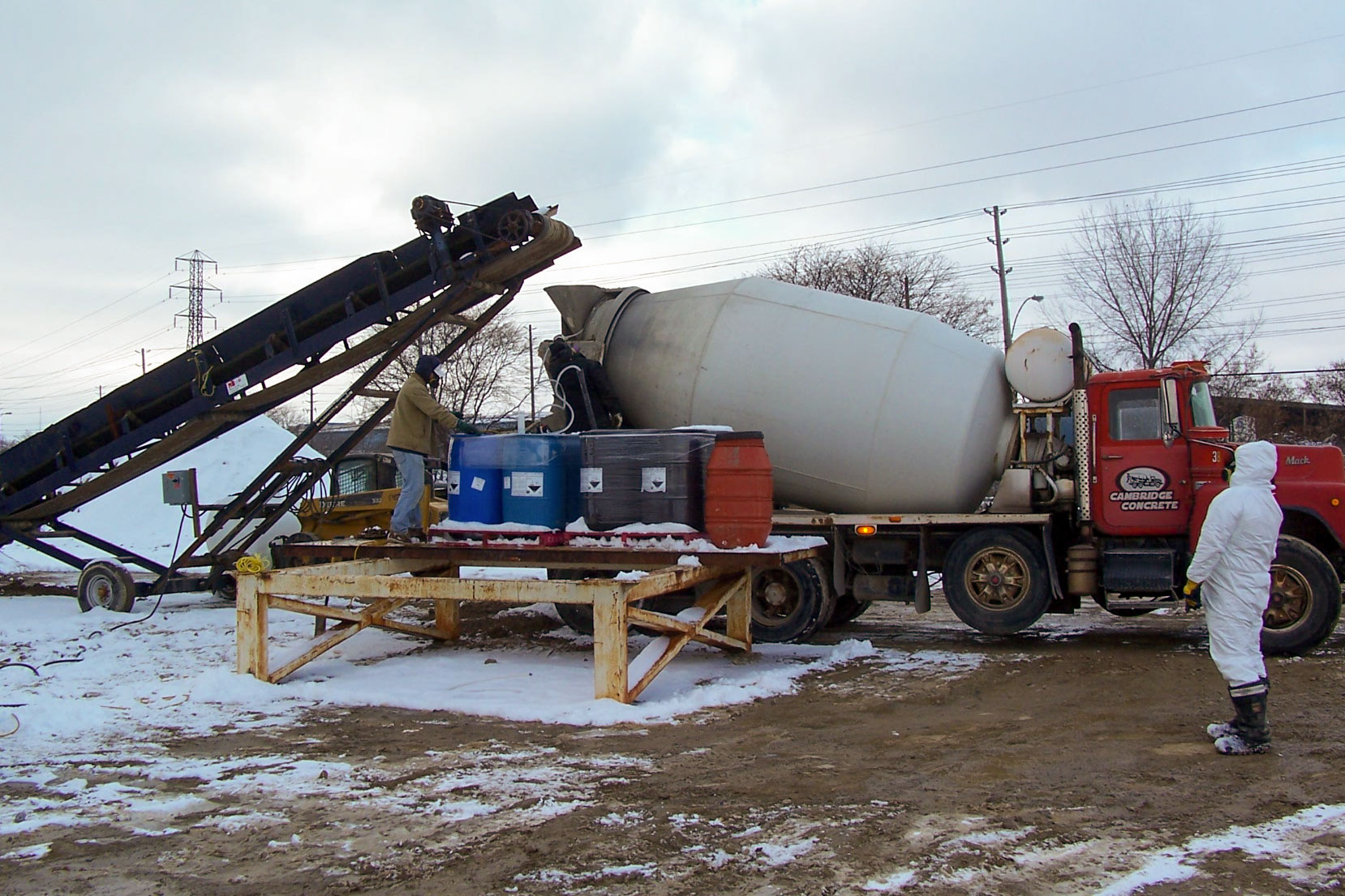 By Viktor Kopetskyy and Jim Phimister

From 2000 until 2007, numerous environmental investigations, including Phase One and Two environmental site assessments, subsurface investigation and monitoring programs, have been conducted at a former industrial facility in Guelph, Ontario. Two separate areas of soil impacted with cyanides, approximately 30 m2 and 400 m2, respectively, were identified within the footprint of the former industrial building, housing electroplating operations.

Depth of the impacted soil ranged from the surface to 6.1 metres below ground surface (mbgs), with irregular distribution of concentrations throughout the depth. The range of free cyanide (CN-) concentrations was between 233 µg/g and 237,000 µg/g. Soil stratigraphy at the property consists mainly of fill material comprised of a mixture of silty sand and silty clay, ranging from 2.4 mbgs to 5.5 mbgs and underlain by native silty sand.

For many years, the most effective methods to treat industrial wastewater containing cyanides were oxidation with sodium hypochlorite (concentrated waste solutions from electroplating baths) or filtration through ion-exchanging resins/membranes (rinse water with low cyanide concentrations). Due to relatively high cyanide concentrations in soil, the oxidation method of remedial treatment is preferable. However, the heterogenic nature of the mixture of the impacted soil and reagents makes the efficacy of the oxidation process questionable, due to slow transportation rates of reagents to heterogenic surfaces of soil particles.

Alkaline chlorination is the most economical and controllable method to remove cyanides from wastewater. Chlorine may be added either as a free gas (either chlorine or chlorine dioxide) or as bleach (sodium/calcium hypochlorite).

Cyanide waste treatment is usually a two-stage process. Sodium hydroxide is added to provide the high alkaline environment required for the oxidation. The initial reaction between chlorine and cyanide is the formation of cyanogen chloride. However, in the high alkaline environment, carbonates and ammonia can be produced as the result of the reaction.

The initial oxidation to cyanogen chloride is slow below pH 8.0. Above 8.5, the reaction goes to completion in less than 30 minutes, even faster as the pH is raised. Cyanogen chloride is volatile and odorous. When airborne it is a lachrymator and special safety precautions are required for anyone in the area. Since the cyanogen chloride becomes more soluble and less volatile as the pH increases and the rate of conversion to cyanate dramatically increases with the pH, the first stage of oxidation is usually conducted at pH 11.

The second stage of oxidation (conversion of cyanate to carbon dioxide and nitrogen) is also pH dependent. At pH 8.5, the reaction is usually complete in 10 minutes and, at pH 10, the reaction usually requires 40 minutes. The recommended rate of chemicals is 6.82 kg of chlorine and 5.21 kg of sodium hydroxide per one kilogram of free cyanide. Even though the reaction may appear to be a two-step process and the rate of the reaction at the second stage is slow under the first stage reaction conditions, cyanate is converted to carbon dioxide/carbonates and nitrogen/ ammonia at the elevated pH values of the first stage reaction.

If insufficient chlorine is added to the first stage, free cyanide will exit and in the second stage with the reduced pH, cyanogen chloride will evolve from the solution. To ensure complete oxidation of cyanide, adequate mixing is extremely important. The tank should have a mixing rate of 2.5 to 3.0 turnovers per minute. Poor mixing may produce isolated pockets where the solution alkalinity has been decreased, and noxious cyanogen chloride gas will evolve. The reaction is controlled with pH and oxidation-reduction potential (ORP).

The remedial action plan to address the identified cyanide exceedances of the applicable standards (Ontario Ministry of the Environment, Conservation and Parks (MECP) Table 4 Stratified Site Condition Standards in a Potable Ground Water Condition) consisted of the following steps:

Prior to the implementation of the remedial action plan, a field pilot test was conducted at the site to evaluate the efficacy of the proposed remedial approach.

A test pit was conducted in the vicinity of a previous borehole where a soil sample with the elevated cyanide concentration was recovered. The concrete foundation was cut and the impacted soil to a depth of 3.2 mbgs was excavated and stockpiled. The stratigraphy of the soil underneath the concrete slab generally consisted of grey to brown sand and gravel, with some cobbles underlain by sand to silty sand fill to a depth of 3.2 mbgs. Fill, in turn, was underlain by brown silty sand with trace clay to the termination depth of the test pit.

To stabilize pH of the excavated soil, the stockpile was sprayed with lime solution and covered with tarpaulin.

Two portable cement mixers with a capacity of two and four cubic feet, respectively, were set up at the site (with regular and advanced design of mixing partitions), along with a power generator and a drum with water for the reagent solution preparation. The following reagents were added to the mixers during the treatment: 12% sodium hypochlorite, 30% caustic soda and detergent solution to improve desorption rate of cyanide particles.

The process was controlled by measuring ORP and pH before, during and upon completion of the chemical reaction. Ambient air and soil vapours in the recovered samples were measured using a VRAE PGM-7800 gas monitor and a portable Gastec pump with Gastec tubes 1G12LL calibrated for hydrogen cyanide. Hydrogen cyanide vapours measured during the field pilot test, both in the excavated soil and in the test pit, as well as the ambient air, were non-detectable.

Based on the results of the field pilot test, a full-scale ex situ chemical oxidation remedial program for cyanide impacted soil at the site was designed and conducted from November 2008 to January 2009.

In October 2008, previously delineated areas of cyanide and copper impacted soil in the eastern (Area A) and northern (Area B) portions of the former manufacturing building were excavated to a depth of approximately 5.5 and 1.3 mbgs. Prior to the excavation, overlaying concrete slab in the area was removed and concrete fragments were stockpiled at the site.

In November 2008, prior to commencing the remediation program, the excavated soil was screened to remove boulders and cobbles and was organized into three stockpiles according to the estimated level of contamination. These stockpiles were located in the central portion of the concrete slab of the former manufacturing building and were covered with tarpaulin. An approximate soil volume in these stockpiles was estimated as 950, 380 and 380 cubic metres, respectively. 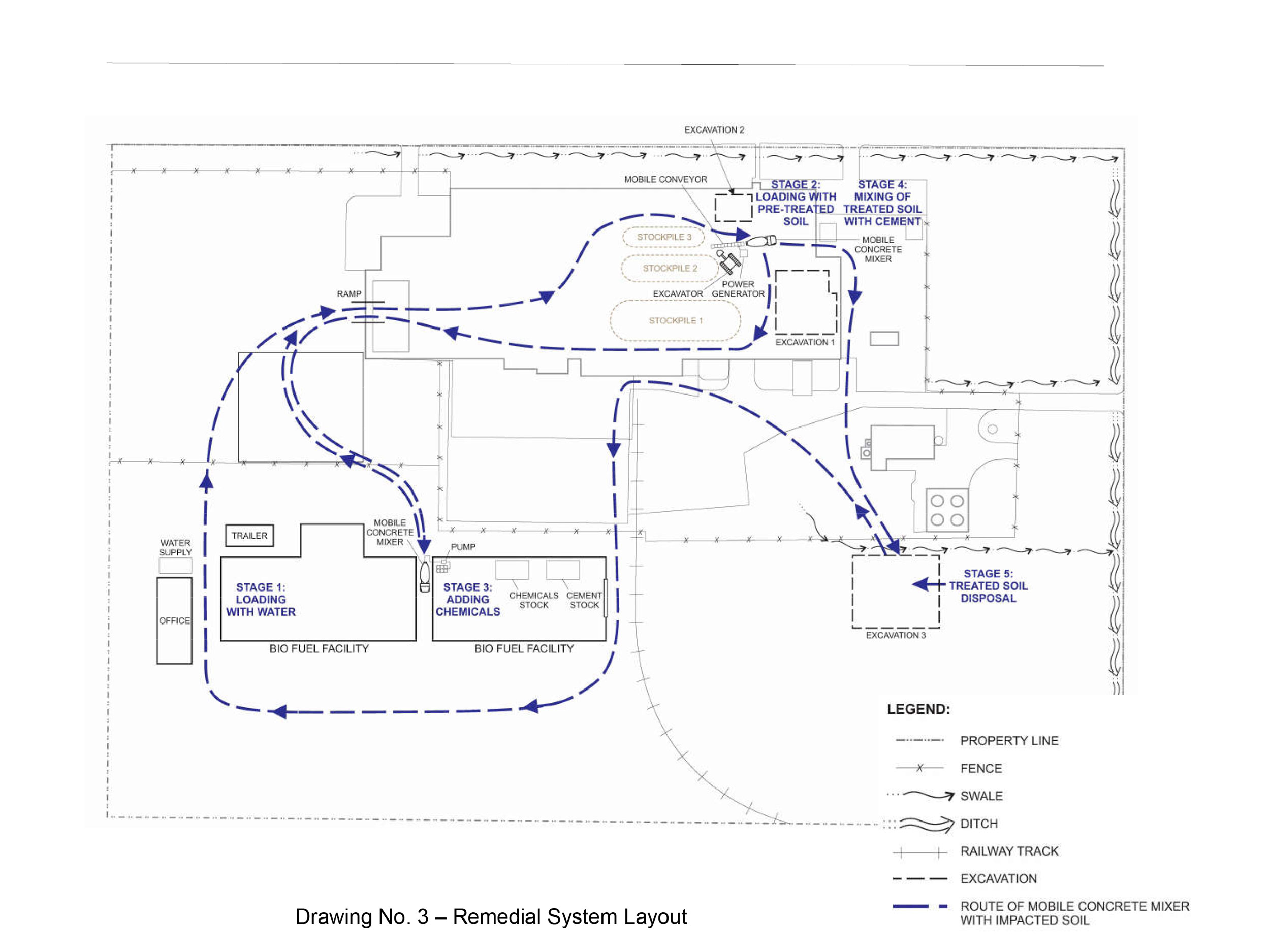 The ex situ chemical oxidation remedial program was implemented using a trommel, two cement mixer trucks with a capacity of 9 m3 each, a mobile conveyer for loading soil and cement into mixers, a power generator to supply power to the conveyor, a large excavator, a skid steer loader, a stainless steel utility pump with the associated hosing for transferring chemicals to a cement mixer, and two plastic holding tanks for water. The program included the following stages:

The ex situ chemical oxidation program of the cyanide impacted soil was conducted from November 20, 2008 to January 13, 2009. Field measurements during the remediation program were conducted using a portable meter HI 9025 for measuring pH and ORP in the treated soil, and VRAE PGM-7800 gas monitor for measuring hydrogen cyanide vapours in the ambient air.

In total, 105 mixer truck loads or 1,345 tonnes of cyanide impacted soil were treated with chemicals. 16,082.5 kg of 25% sodium hydroxide and 15,444 kg of 12% sodium hypochlorite were used. Cement adding to the treated soil to produce un-shrinkable fill varied from 200 to 280 kg per mixer truck load. A treatment period was initially set up as 45 minutes, and then was adjusted to 30 minutes, based on the field observations.