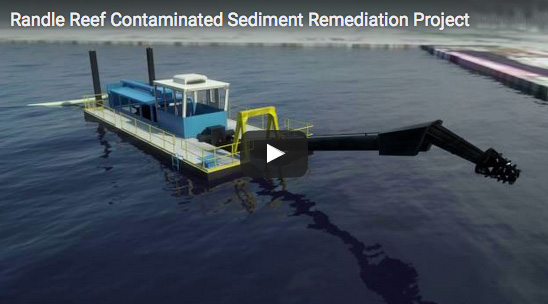 Work on the second stage of the Randle Reef remediation project in Hamilton, Ontario, was awarded to Milestone Environmental Contracting Inc. and Fraser River Pile & Dredge Inc., in a $32.9 million joint-venture contract announced on July 21, 2017.

Stage One of the project involved re-constructing an adjacent harbour pier wall and constructing an engineering containment “box” which uses double steel walls to seal in approximately 6.2 hectares of the most heavily contaminated soil.

Stage Two involves dredging contaminated sediment from the surrounding areas and placing them in the containment facility via an underwater pipeline. This stage is expected to begin in the spring of 2018 and take two years to complete.

In Stage Three, the contained sediment will be dewatered and compacted, with an impermeable cap being placed over the containment facility. This final stage is expected to be completed in 2022.

Remediation of Randle Reef is the last remaining environmental restoration project in Hamilton Harbour. According to ECCC, its completion will help remove the harbour from the list of Great Lakes Areas of Concern, and spark development along Hamilton’s waterfront and increase tourism.

For more information on the project, visit: www.canada.ca or  www.randlereef.ca

Dec 5, 2022
The Saskatchewan City of Moose Jaw is pursuing some $24 million in federal infrastructure funding to replace a 61-year-old lift station that lacks the...