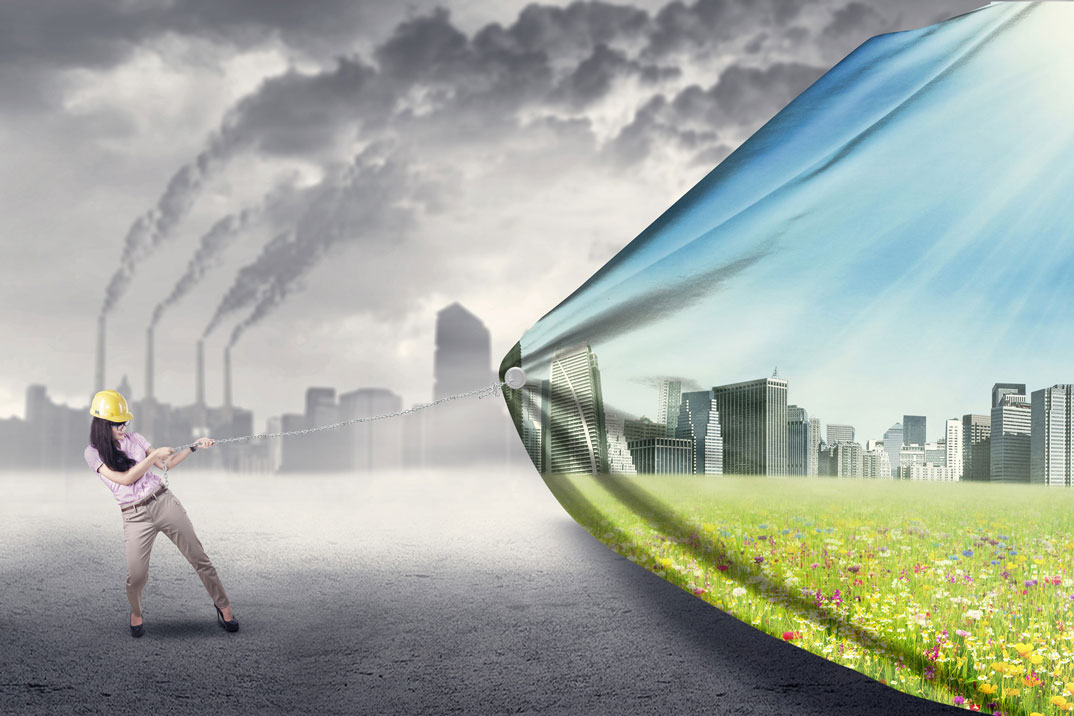 A growing number of national and subnational jurisdictions have taken steps to develop plans and programs to reduce the emission of greenhouse gases (GHGs). While it is clear that consensus regarding climate change and momentum to address its threats are both building, jurisdictions have yet to coalesce around a common strategy. This has created a patchwork of solutions and encouraged “free riders”.

The Government of Ontario is finalizing plans to launch a cap-and-trade program that will serve as the central component for their ongoing strategy to combat climate change. The Ontario Society of Professional Engineers (OSPE) realizes how critically important the planning, design and execution of this policy is for the province’s environment and economy, and they have voiced their support and criticisms throughout the public consultation process.

Efforts to corral carbon in Canada

In the Canadian context, provincial governments have largely taken a leadership role in curbing emissions and transitioning toward low-carbon economies. Broadly speaking, current climate initiatives in Canada fall into one of two camps: carbon tax systems or cap-and-trade programs.

Launched in 2008, British Columbia’s $30 per tonne carbon tax collects $1-billion annually. This is a revenue-neutral program whereby all funds are redistributed into the economy through a “tax-shift” for businesses and households. Essentially, program revenues are redistributed to organizations and individuals that show environmental proactivity, improved stewardship, and realize energy efficiencies.

This year, Alberta, ahead of environmental conservation, introduced a tax on carbon emissions. Levying an initial rate of $20 per tonne, this price will be raised to $30 after one year. Alberta’s government forecasts the carbon tax will collect $9.6-billion over the next five years, to be reinvested into the provincial economy to realize energy efficiencies.

By contrast, in 2013, Quebec formally launched its cap-and-trade system, now linked with California as part of the Western Climate Initiative (WCI). This partnership created the largest carbon market in North America and established the world’s first carbon market to be designed and operated by subnational governments of different countries.

In February, Ontario introduced legislation to create a cap-and-trade program as part of the Climate Change and Low-Carbon Economy Act.

Unlike carbon tax systems that do not place hard limits on emissions, cap-and-trade programs set a clear limit on GHG emissions. Under cap-and-trade, this limit is translated into tradable emission allowances, each typically equivalent to one metric tonne of carbon dioxide or equivalent. These are auctioned or allocated to regulated emitters on a regular basis.

At the end of each compliance period, each emitter surrenders enough allowances to cover its actual emissions. The total number of available allowances decreases over time, to reduce the total amount of GHG emissions. By creating a market and a price for emissions reductions, the cap-and-trade system offers an environmentally effective and economically efficient response to climate change.

While the scope and design of Ontario’s cap-and-trade system have yet to be determined, there is already a significant congruence between the California and Quebec regimes. For example, both systems cover the same GHGs and sectors, set the same emissions’ thresholds, and have virtually identical allocation methods.

The significant parallels between Quebec and California’s cap-and-trade systems have enabled both markets to integrate quickly and seamlessly. Despite only officially linking carbon markets in 2014, they have already successfully held joint auctions of greenhouse gas allowances. Given Ontario’s desire to link with the cap-and-trade markets in Quebec and California, their systems will likely play a significant role in dictating the approach Ontario takes.

The significant similarities between Quebec and California’s systems are largely dictated by detailed policy architecture prepared over a period of several years by the Western Climate Initiative (WCI) and their partner jurisdictions. The WCI, launched in 2007, consists of a voluntary coalition of U.S. states and Canadian provinces, including Ontario. They have developed guidelines to facilitate mutual cooperation in order to reduce greenhouse gas emissions, in particular by developing and implementing a North American system for cap-and-trade.

Ontario has also consistently emphasized the importance of linking cap-and-trade systems with other jurisdictions. In 2008, Ontario Premier Dalton McGuinty and Quebec Premier Jean Charest signed a Memorandum of Understanding (MOU) with respect to a provincial and territorial cap-and-trade initiative. The MOU heavily contemplated and encouraged linkages to other GHG cap-and-trade systems, noting that such linkages could reduce GHGs at lower costs, allow for larger trading volumes, improve liquidity, and speed the pace of innovation, among other benefits.

Shortly after entering into the MOU, Ontario demonstrated its further commitment to a cap-and-trade system by introducing enabling legislation with Bill 185, the Environmental Protection Amendment Act, 2009 (Greenhouse Gas Emissions Trade). The Bill provided the government with broad authority to implement emissions trading systems and establish rules relating to the scope, trading, distribution, and administration of such a system. Like the WCI and MOU, Bill 185 explicitly contemplates integration with other regional cap-and-trade systems.

The need for a border adjustments framework

A cap-and-trade mechanism functions properly when it is connected with other global entities to facilitate a trading structure and force GHG reductions. This complex arrangement needs to work by design, operate based on objective scientific findings, and be outcomes-focused. It should be calibrated to ensure that reduction targets are being achieved.

In the event that connections are not made, are not equitable, or fail to expand, Ontario’s diverse mix of economic sectors could face significant competitive disadvantages, or these pressures could undermine Ontario’s emissions targets. Ensuring that the cap-and-trade program does not disadvantage Ontario producers is key to sustaining public support for the program.

Based on Ontario’s transformation costs to achieve an 80% reduction in emissions from 1990 levels in the electrical sector, OSPE estimates that, to achieve the same goal across all other sectors of the economy, will require substantially higher carbon prices than the $30 per tonne of carbon dioxide equivalent that is currently anticipated. The public is unlikely to tolerate high carbon prices if they create economic hardship in Ontario due to unfair trade.

As it stands, Ontario’s program fails to account for the foreign purchase of allowance credits. Because foreign company emissions are not part of the process for determining allowances, forcing these firms to buy credits in the Ontario market will affect allowance prices in ways that were not anticipated when quantities were established. To prevent these ill-effects, border adjustments act as a carbon tax payment for imports into Ontario or as a carbon tax refund for exports going out. This applies to jurisdictions that do not have an equivalent program.

In context, the market would determine a carbon tax value that would be applied on imports from and exports to key jurisdictions like Michigan, Ohio and New York that do not have a cap-and-trade program recognized by Ontario or its likely program partners (such as California or Quebec). A border adjustments framework would provide a more precise mechanism for fair trade between jurisdictions with differences in their carbon reduction programs. Border adjustments would also put additional pressure on foreign jurisdictions to introduce their own carbon-pricing programs to avoid the carbon price penalties on their exported products.

For Ontario, the window of opportunity to take the lead in developing a border adjustments framework is quickly closing. California is currently in the middle of their second compliance period and will review the implementation of a border adjustments framework ahead of their third period (2018-2020). This would impose similar compliance costs on imports from jurisdictions without cap-and-trade program linkages equitable to California’s. If California proceeds with such a framework, it will take Ontario some time to modify its own program, and it will need to accommodate California-focused regulations that are not in Ontario’s interests.

Border adjustments make sound policy sense. Ontario has one of the cleanest mixed generation electrical grids in the world and should receive credit from its trading partners for this value-added feature. Ontario has already reduced emissions in its electrical sector by 80% from 1990 levels, putting it about 35 years ahead of the rest of the world.

Allowing products made with high-emissions, low-cost electricity to enter Ontario without a carbon price adjustment would be unfair to Ontario companies. Border adjustments would accelerate carbon reduction in trade-exposed sectors, while maintaining economic priorities and protecting against job losses. Through border adjustments, Ontario businesses would be protected from unfair competition from high-emission jurisdictions.

Looking at the current situation from a global perspective, the proliferation of Chinese solar panels serves as a clear example of how a border adjustments framework would assist Ontario’s environment and economy. Solar panels manufactured in China are made with one of the highest GHG-emitting electrical systems in the world and are undercutting low-emission solar panel production in Ontario. This is a “lose-lose” arrangement for the province both environmentally and economically.

Border adjustments would serve to address this and other gaps between policy objectives and outcomes, while also leveling the playing field for Ontario’s domestic and export industries.

During public consultations with the Ontario government on Bill 172, the Climate Change Mitigation and Low-Carbon Economy Act, the argument for border adjustments was presented by OSPE as the voice of the province’s engineering community.

It is OSPE’s belief that by setting a price on carbon and permitting the purchase and sale of emission allowances, cap-and-trade systems have the potential to become the cornerstone of an integrated environmental approach aimed at encouraging the most cost-effective GHG reductions.

Ontario wants to establish the foundation for an economic strategy focused on developing a green economy. With this objective in mind, the Ontario Society of Professional Engineers has urged the government to establish a border adjustments framework that will defend the integrity of our environmental commitments, encourage our trading partners to adopt carbon pricing programs, and support Ontario’s economic interests.

Fluoride back on tap in Windsor after political, supply chain delays

Water and wastewater infrastructure challenges in a changing climate